Yesterday, the first day of May, I ran up the hill early, and just before getting to Hilltop Farm, there on the telephone wire, was my first swallow of this year! Last year's was on the 18th of April, and a similar date in 2011, so I suspect s/he and mates may have been around for a while and I haven't noticed. This is my mental pattern most springs with the first swallow though: I think I must just have been missing them, and then over the next few days notice increasing numbers, which suggests that that first one really was pretty early. I didn't get a picture, so  here's a link to one of Somerset's best birding photographers

And when I got ten metres further, I met a couple of escaped lambs noisily roaming around outside the field where their mothers and the rest of the gang were. There were less than desperate to get back in, and rather than running away, came up and bashed my shins. Not bottle lambs though, as when I offered my fingers they didn't respond. 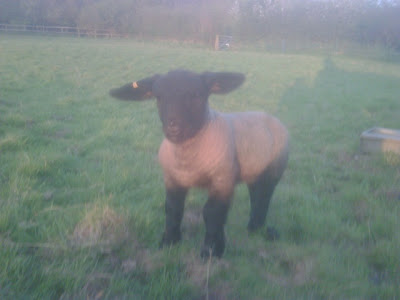 This is another cheat photo, being in fact one of Alison's lambs from three or four years ago, taken on a very misty morning with a very damp phone. Still it looks appealing, and they were!
Posted by Joe at 07:48