26 Books: A Book By An Author You Love

This would have ben number 7 for Bringing up Burns.


'Flight Behaviour' by Barbara Kingsolver (J):
(read February 2015)
I'm writing this review some time after I read Flight Behaviour, and I am a little surprised that I gave it full marks, as I think it is less good than The Poisonwood Bible. And that may be, as I find often the case with an author that I love, that if they are consistent, what is exciting and wonderful about the way they write the first time, is less exciting with repetition.

That said, I read Flight Behaviour twice, once several years ago, and more recently when it came up in our book club, and I found myself defending it against those who saw it as mainly for the purpose

of proselytising Kingsolver's ecological message. So what? (unless one doesn't agree with that message about the danger of climate change, or unless her story doesn't work because she bends it to this purpose).
It's a VERY good story, with well drawn characters, living out their believable lives with real human families and their impossible difficulties, and at the same time living through a small scale environmental catastrophe (or is it: read to find out).
Once again, some of Kingsolver's characters are strongly motivated by Bible Christianity, and some of the others find this behaviour objectionable. Some of these Christians are rigid and mean, and others aren't. Does Kingsolver herself have these issues in her immediate family, or is modern America so full of this type of Christianity that it's always relevant?The only thing missing from this book that I appreciated about The Poisonwood Bible is that element of understanding a piece of history. There is nothing about fairly recent West Virginia (or wherever it's set, somewhere near there I think) that I now feel enriched for understanding.


War Horse by Michael Morpurgo (E):
I really love Michael Morpurgo; he was such a beloved author of mine as a child. I lapped up his books, particularly the ones set in the Scilly Isles that are so familiar to me. Since War Horse is now his most famous book and I hadn't read it (it came out after I was a bit older) I really felt I needed to read it. I'd love to see the stage production (I think it's still on, though not at the National anymore), as the feedback from that has been phenomenal. 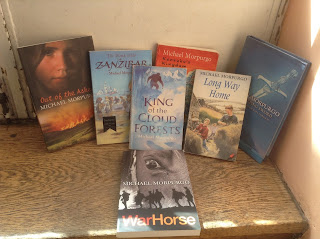 Anyway, onto the book.
Actually, I was really disappointed. It's hard to say this because: 1) I love Michael Morpurgo; and 2) it's difficult to go against public opinion. Everyone loves War Horse (well, I'm sure it's not everyone), but it just didn't work for me. There were too many fast changing characters, so as each one was passed by (or had passed on), there hadn't been enough time to become emotionally attached to them. I felt like: 'oh, that's another one.' It was a stream of drudgery through WWI with each character (apart from Joey) making a brief exit and entrance. There weren't really any other main characters, except from Albert but he didn't have all that much 'screen time' because the middle of the book was centred elsewhere. 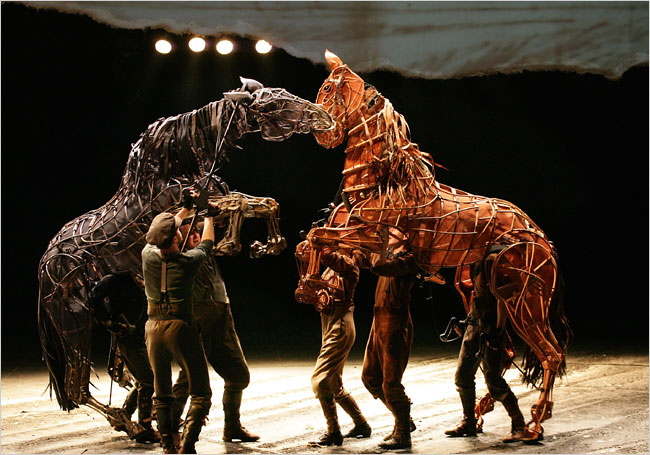 I'm disappointed. I wonder if this is something that has come with age; maybe Morpurgo's other books are like this as well, but it didn't feel so when I was younger? Maybe I've read so much in the intervening time that this style just isn't emotionally engaging enough anymore. I don't dare to read my old favourites. I'd still like to see the stage play, but not in such a burning desire sort of way anymore.
It's sad, but maybe, Michael, I've just grown out of you. I miss you.
Posted by E at 15:12