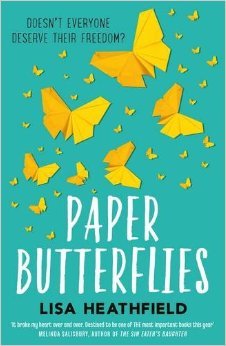 Paper Butterflies by Lisa Heathfield
My rating: 4 of 5 stars

BAM. That's how this book hits you.

From the very first page we are introduced to June, at this point five after her mother has recently drowned, surrounded by her new family - stepmother Kathleen and stepsister Megan. Her dad is still around but works, so Kathleen is the main caregiver, and she follows the stereotypical fairytale step-mum: maliciously, uncomprehendingly cruel. Every time June thinks something is going to change, she's let down. 'Oh, look! She's made me a lovely birthday tea with a nice cake!' But all this is an elaborate way for Kathleen to further her torture of June. Unfortunately it's not exactly a fairytale ending with a prince to ride off into the sunset with, but she does find some escape.

She meets Blister, a boy from a house of seven, and finds her salvation. As much as possible, she spends her time with him and with his welcoming family who are the antithesis of her own. Although she tells Blister a little of what goes on at home, June cannot tell him the full story. And no one else knows. She berates herself later for not telling, but how can a child blame themselves when they are that scared? June is convinced that no one would ever believe her. But, as the years go by, she lets Kathleen know she is not beaten, fighting back by not reacting or small acts of retribution. But it doesn't stop.

One form of abuse that I'd never really considered before is the way Kathleen forces June to eat. To eat and eat beyond satiation... 'She wants me to be fat.' So, June's life at school is even harder, when children tease her and call her names. She feels embarrassed eating in front of Blister's family:

'I know what they must think. I want to tell them. I want them to know that me being a bit overweight isn't my fault. That I don't want to eat everything Kathleen puts in front of me but fear makes me do what she says.'

And that's what keeps her quiet: fear. But what child could speak up for themselves in that situation, however hard June berates herself in retrospect.

This is a painful read. It feels odd to give it four stars, meaning 'I liked it,' because I didn't exactly enjoy reading it. But Heathfield has created an entirely compelling read, with a horrific unexpected climax. The ending, a note from Blister (giving away no spoilers), is beautiful. Throughout, you are really inside June's head, and you feel her embarrassment, her shame and her righteous anger. That's the mark of a good author.

But I would definitely warn people away from this book if they have experienced any form of abuse themselves. I can't speak from experience, but I imagine it might be too hard to read.

Apart from abuse, it is also about the power of friendship, and that's the redeeming quality here. Blister and June's friendship starts as childishly innocent, and gradually morphs into a deeper relationship of love. It's wonderful to watch them blossom despite the world around being so dark.

I devoured this book in a day. (Well, an afternoon and a morning). It's a very fast read. I would recommend it, but with that caveat: not for anyone with personal experience, or for people who are particularly sensitive. This book hurts.

Thank you to NetGalley for giving me the opportunity to read this. I really want to go out and get Heathfield's debut novel now, but maybe I'll have to wait until I've got through a few more in my TBR pile...