Another common interest we have at CCC is enjoyment of poetry, mostly reading it, occasionally writing it, and also learning it. There is something very special about learning poetry aloud - it is like song, and feels like it should be an oral art. Also, the act of learning a poem off by heart necessitates knowing the poem very well, and, as with all good arts, knowing something more really adds to the enjoyment of it. You get to realise things about it you may otherwise have not done, you get to hear rhythms and subtle rhymes you may have missed, and you often end up reading others' views about it as well.

J and E have been learning poems aloud together for a while, from this book. I would wholeheartedly recommend this book to anyone interested in poetry, even if you don't consider yourself as someone who "can" learn things off by heart. Ted Hughes' selection is amazingly wide ranging: from Auden and Sassoon, to Byron and Shakespeare: there is truly something for everyone. J has learnt the whole book before, but it is my first introduction to it (although I already know some of the poems) and I am thoroughly enjoying it.

We so enjoyed learning poetry together, and sharing it, that we thought to extend it. We now have a virtual poetry club.' It works pretty much how a book club works - each month someone has the privilege (a fairly daunting one!) of choosing one or two poems for everyone in the group to learn; we have a month or so to learn it, and then we "meet" on Skype to share them together, and talk about the poems as well.

This month is my month, and I have decided (nervously!) to do two villanelles. To those who don't know, a villanelle is a strict form that involves six stanzas - five that are tercets (three lines long) and the final stanza is four lines long. There are only two rhyming words in the whole poem ie. everything is either an 'A' or 'B' rhyme. Also, there are two "refrains" that repeat in a strict order throughout the poem, one in each stanza until the quatrain where they both appear. I like villanelles; I first came across the form in this brilliant book. 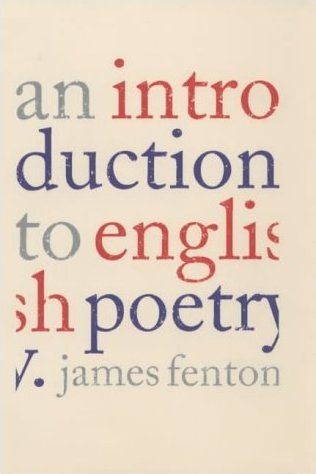 (Another book I would definitely recommend to anyone interested in poetry - I was given it at about age 10 or 11 by my gran and devoured it then; it's very readable and not dry at all.)

However, villanelles are notoriously hard to get right! The most famous is Dylan Thomas' Do Not Go Gentle Into That Good Night, but that just seemed a far too obvious choice. In the end, I went for two contrasting villanelles: one serious, and one comical.

A noun's a thing. A verb's the thing it does.
An adjective is what describes the noun.
In "The can of beets is filled with purple fuzz"

of and with are prepositions. The's
an article, a can's a noun,
a noun's a thing. A verb's the thing it does.

A can can roll - or not. What isn't was
or might be, might meaning not yet known.
"Our can of beets is filled with purple fuzz"

is present tense. While words like our and us
are pronouns - i.e. it is moldy, they are icky brown.
A noun's a thing; a verb's the thing it does.

Is is a helping verb. It helps because
filled isn't a full verb. Can's what our owns
in "Our can of beets is filled with purple fuzz."

See? There's almost nothing to it. Just
memorize these rules...or write them down!
A noun's a thing, a verb's the thing it does.
The can of beets is filled with purple fuzz.


I enjoy this poem - it's good fun! It also follows the villanelle structure strictly, whereas the next one doesn't.

The art of losing isn't hard to master;
so many things seem filled with the intent
to be lost that their loss is no disaster,

Lose something every day. Accept the fluster
of lost door keys, the hour badly spent.
The art of losing isn't hard to master.

Then practice losing farther, losing faster:
places, and names, and where it was you meant
to travel. None of these will bring disaster.

I lost my mother's watch. And look! my last, or
next-to-last, of three loved houses went.
The art of losing isn't hard to master.

I lost two cities, lovely ones. And, vaster,
some realms I owned, two rivers, a continent.
I miss them, but it wasn't a disaster.

- Even losing you (the joking voice, a gesture
I love) I shan't have lied. It's evident
the art of losing's not too hard to master
though it may look like (Write it!) like a disaster.

In this, Elizabeth Bishop has stretched the form and "cheated" a little - she has only one refrain (the art of losing isn't hard to master), and her second "refrain" is just that the final word (disaster) remains the same. I really like this poem - how the things she loses throughout the poem gradually become more and more, moving from the impersonal (words, and the odd hour) to more personal (my mother's watch) until it reaches huge proportions (cities, realms, a continent). Throughout this, she maintains the idea that the "art" of losing isn't hard to master, as though these things are of little consequence. It becomes less and less believable, as the poem progresses, it seems more like the poet is trying to convince herself of this rather than to convince us, the readers. In the quatrain, the parentheses (write it!) shows the first "crack" in her seemingly iron shield keeping her emotions in check - and here it is the loss of a person that does it. It seems that this is her greatest loss, and what she is really trying to do is rationalise and minimise it so that she can cope. I find it very effective.

So, there we have it: my choice of poems for April's poetry club! I really hope everyone enjoys them.