This is about how we keep ourselves warm at 2, CC. In the past there were five chimneys, four with fireplaces and one with a boiler at the bottom end. When we arrived, only one was still open, and that lead partly into a bedroom of our neighbours! When we opened another up, we found 10 feet of jackdaw nests, mostly twigs, and quite a lot of newspaper and someone's trousers. (Our neighbour R identified them as a pair he'd had in the 1980s.) Now we have two woodburning stoves so we have to keep these fuelled.
"Wood warms you twice" is the saying, and it underestimates by a long way. When Ross and I were getting in some of the year after next's wood yesterday, we estimated it warms you at least four times.
So yesterday we were over the other side of the valley in Loxton Woods, where we have an arrangement to take out fallen trees. It's a lovely wood, and especially good for our purposes because it has a lot of ash in. In a few years time...? 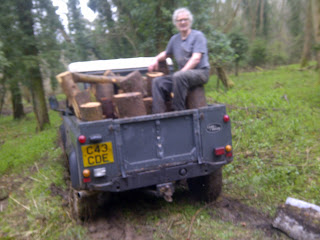 It was getting a bit damp in the woods by the time I took this, but the main reason it's so blurry is my phone.
Ross, who has the Landrover mainly for this purpose, skids and slides in and out of the wood, then back to our garden, where he neatly stacks the logs:

A was away at this point, and the first thing she said on coming home was: "What about the anenomes?" Oh yes, there are anenomes under the apple tree, and I had forgotten to let Ross know. He did know to avoid the primroses and daffodils. So what happened? 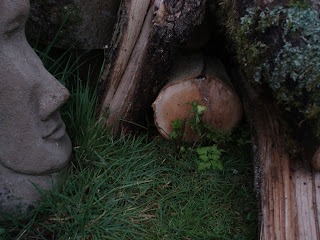 See how gently he has arranged the logs around the nearly flowering plants! (Easter Island statue not to scale.)
I then rearranged the wood at the back of the garden, where it will dry out ready to be cut in summer 2014 for the winter of 2014/15. 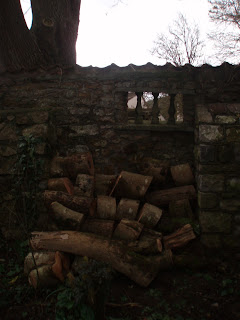 The big tree you see just the other side of the wall is in our neighbours' garden, and is another ash. Another big loss should ash dieback arrive.
And finally, a view of our roof (ours and our neighbours at No.1) showing just how many chimneys there are, and a jackdaw waiting to dive in and make a nest. 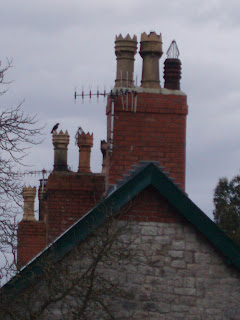 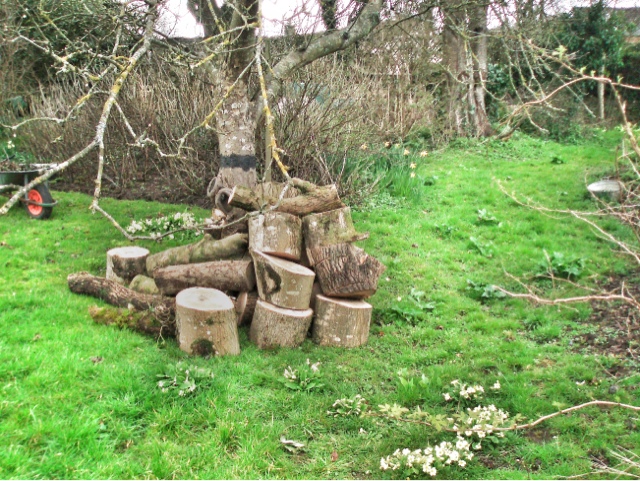