So, the last day dawning - and with beautiful weather after a short period of dullness! No rain! Couldn't have picked a better weekend. Perhaps the sun was a bit too hot for the builders, as fatigue set in a bit for a few, and they needed sun creaming and hat reminding, as well as gallons of water!

So, the last morning planning meeting, over pain au chocolat: 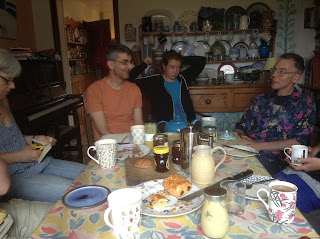 And C speaking eloquently about how everything feels coming to the end.

At this stage, there were only a few shingles on the LHS started by cousin J, so this was one of the key things to do. There was also a bit more work on the back wall, sky lights to put in, and more braces, as well as all the pullins to be finished at the back...  So... not much! Especially considering there were guests due to potentially arrive from 10am... Luckily even the most die-hard field festival goers didn't arrive 'til 12 or so.

But things had to prepared for the guests too, so there was a while where builders helped in this, but then A did a sterling job all by herself - cooking and planning for weeks in advance. (Cheers for the people behind the scenes!) 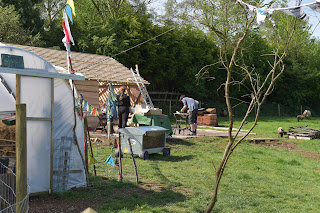 Getting started in the glorious sunshine always puts everyone in a good mood, so never underestimate the power of warmth! So, at the start of the day there were barely any shingles, so this (as well as the braces) was the key job - we wanted a roof! The sky lights were at the back, and are also in situ, but there's a distinct lack of shingles on the back roof... It's fine: a project for the rest of 2CC in between the rest of life for the next few months. But having them complete at the front makes it really look finished. 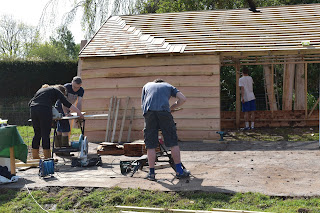 So... mega shingle time, aa d you can see from this picture: there was a lot needing doing. And the back wall, as much as possible AND more braces. And the pullins. Sounded like an impossible job, but it's amazing what six builders with lots of stamina, work ethic, cake and powerful tools can do!

There seemed to be some despair at some points - will it all come together? 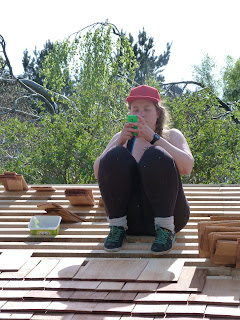 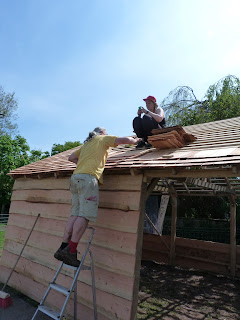 And the sheep were ever-happy; we also realised there are multiple uses of shingles.


So, the guest started arriving. A had little idea who was coming and when, so catering was a little haphazard but no one went hungry, that's for sure! 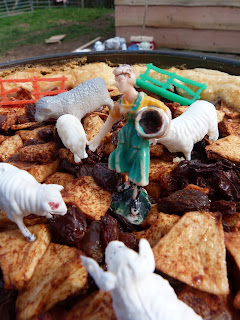 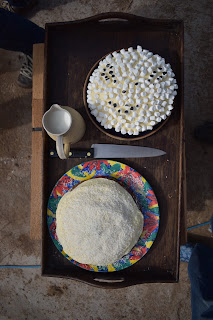 Lots of intrepid guests had a go doing some shingling, including my Good Mother C - pretty impressive! There was a treasure hunt for two little boys where they had to find sheep stones hidden around the garden but I think I made it too difficult, because there are two that I couldn't even remember! We also had a sheep cake competition, but only 3 competitors. I think there was a clear winner - there's A feeding the sheep amongst the hay (apples) and mud (sultanas) - a very impressive Dutch apple cake from the Oof Family in the village. Amazing! A well deserved first prize.

And the last bits of the barn!

And then: The Barn Opening Ceremony. Although it's not 100% done, it's certainly complete enough (and in such a short time) for the ceremonial opening. A started with a funny poem about needing to have sheep and wanting to have them in the house, but this was an impossibility, so the barn had to be made! Uncle M blessed the shed with a Berry poem, and T and H (unfortunately absent)
had written some haikus. A also read a poem written a while ago from some dear friends of ours, which was special for our family. And then... we had the ribbon cutting! 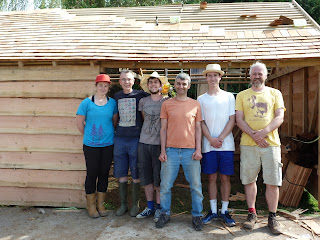 And everything all coming to a sad close... visitors leaving, and builders going back to their normal lives. It all seemed sad to finish, but everyone was so proud of the work that had gone into it.

And so, here are the six amazing builders: Little M, J, A, C, Architect J and Uncle M. What a creation they have made.

The stay-at-homers were packing up until late, and then the house seemed very quiet. The cats were ridiculously pleased to have the run of the place to themselves again, and normal life resumes. It's almost as though the JAM² has always been there.

In all her glory: 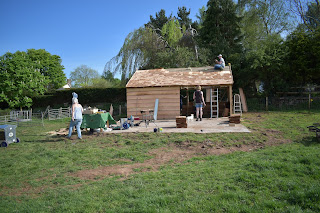 And what of the amazing camaraderie and fun that the builders had throughout their days together? United by J, some had never met before, but they've really done something stupendous that I imagine will stay with them. Don't worry, I'm sure we haven't heard the last of them, like the dodo... 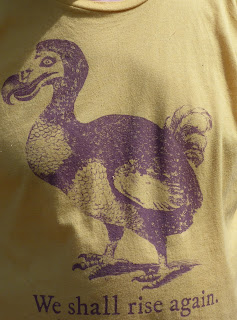 Thank you so much to everyone who came, particularly our stars. I hope these blog posts have been enough to document at least some of what went on. Builders (and others) feel free to comment and tell me if there's anything I've missed out or got wrong. This is my tribute to the barn, small as it may be.