After much anticipation and with a palpable pulse of excitement building in the little North Somerset village of Winscombe, the 2008 Book Group met at the local library at 8pm, Tuesday last to debate, decide and declaim the Booker shortlist and winner.

Ably organised by A, highly experienced in such matters, the regular members of this literary debating club turned up promptly, to be greeted by the slightly nervous library staff, and several irregulars, drawn in by curiosity and the wish for a wider society.

By the time A and J had set out the chairs, the floor area was full. What a perfect venue for such an event! How pleased we were to lend our support to the noble enterprise of keeping alight the flame of literacy in this once noble backwater.

The librarian and her assistant busied themselves readying the equipment for our link to the Guildhall in London where the other Booker event of 2013 was taking place simultaneously.
At 810pm, satisfied that all the guests and members were refreshed and fortified, A called the meeting to order, welcoming the trepidatious newcomers and settling her own group (most of whom it was noted had dressed and even had recent topiary to mark the occasion!). The plan she announced was that each of the five shortlisted books would be addressed by its champion, with a synopsis, critical remarks and illustrative readings, each presentation not to take more than ten minutes.

J started with Eleanor Catton's The Luminaries. His opinion had not changed since his writing earlier in this blog, and he chose a piece from the beginning of the work (two sentences lasting a page) and from the end (a page of sentences of no more than three words). Both readings contained reference to rain, which J noted for the first time, and felt that this ameliorated his opinion a little.

J2 presented The Book of Mary, Colm Toibin, which she felt to be fascinating, a striking insight into the life of Mary the mother of Jesus, and well worth reading. Though it was very short, the aftermath was that of having read a much longer book, she said (and there was general agreement). J2 did not provide any readings.

R spoke about NoViolet Bulawayo's We Need New Names, starting with the remark that as it was now a month since he had read it, he remembered little. His opinion was once again little changed from that published earlier in this blog, though he added the remark that he didn't even know why it had that title (there was a murmur of dissent at this). Again, no readings were provided.

It transpired at this stage that none of the guests had read any of the books, and that apart from A and J, only C1 had read more than their own allotted book from the shortlist. This began to explain the slightly uneasy atmosphere and appearance of strain on the faces of some of those present.

The librarian was repeatedly making brief contact with the Guildhall, only to have her elderly Dell computer throw her off when a couple of sentences of Robert MacFarlane's (A's counterpart in London) peerless prose were heard.

A herself presented Jhumpa Lahiri's The Lowland, being generally very much in favour, and recommending it to all.
D spoke about Jim Crace's The Harvest, describing it as 'almost poetic', and then responding to J's comment that he, D famously doesn't like poetry, by saying 'I did say "almost"'.

Finally A2 read from and brought to us her thoughts on Ruth Oseki's A Tale for the Time Being. Her opinion had entirely changed from her complete dismissal as written about earlier in this blog, and she spoke of how much she appreciated the way that Zen habits of living were shown in this novel to help people in difficult situations. At the end of her presentation, we were surprised to hear that despite her positive remarks, she would still not have felt it worth reading had she not had to read it.

The Decision: Opinions and opinionation were unusually lacking, perhaps reflecting the general lack of reading. D recommended Harvest and was backed up by C1, Joe strongly disrecommended The Luminaries, and instead promoted both Ruth Oseki's and Jhumpa Lahiri's books. If there was a positive decision, it was for Harvest.

The noble librarian, brought to a crisis by the recalcitrance of her technical equipment, managed to obtain and hold a connection to the Guildhall just long enough for us to hear 'And the winner is...' and to see that it was a woman (thus not Jim Crace), before the Dell finally crashed irretrievably.

The group broke up hurriedly, all rushing to get home to see the result (apart from R, who was rushing home to get the result of the England:Poland contest.) 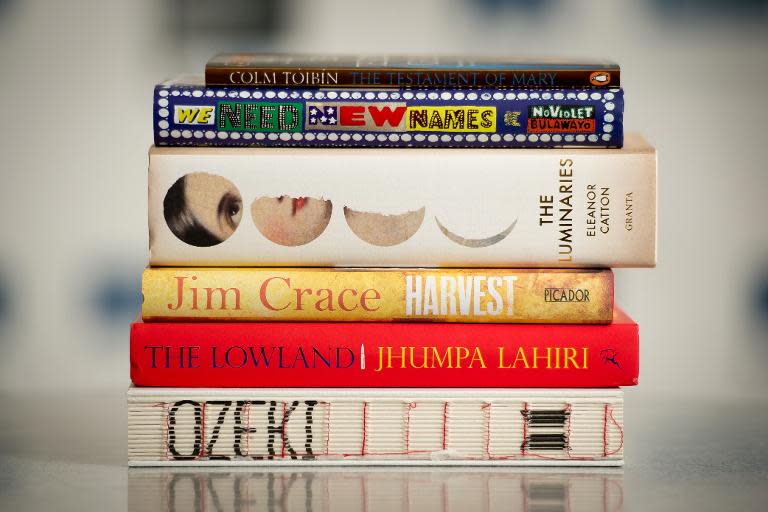 (images courtesy of the Man Booker website - thank you, and thank you for featuring us on your website!)

We await The Winscombe Booker 2014 with anticipated pleasure.