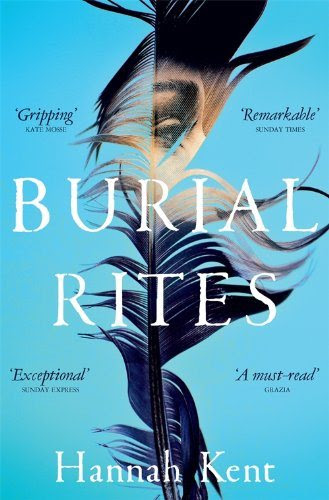 My third Mr B's book, and what a winner! After being a little bit disappointed (but only a bit) with The Testament of Jesse Lamb, this was completely the opposite. Thank you to my bibliotherapist, Emma, for such a brilliant choice! H had actually been given this by A for Christmas, and they read it in their book group a few months ago, so it came with more good recommendations. I wasn't disappointed - from the first chapter I knew I was in good hands.

Firstly, I'd like to say that Iceland is pretty much number one on my want-to-travel-to destinations in the whole world. Has been since I was about... twelve or thirteen? For lots of reasons – but mostly just because of the harsh beauty of the landscape. So, this book was intrinsically attractive to me before I started.

Burial Rites is the story of Agnes, the last woman to be executed in Iceland in the 1800s. It is Kent's debut novel, and the meticulous research gone into it (it was part of her PhD) is apparent from the onset. The atmosphere is hard, harsh, and cold; the setting is more than just a backdrop, as Iceland seems almost a character in its own right. This book could not have been set anywhere else, the setting is integral to the story

At the start of each chapter are official documents, and I think they may be real from Kent's extensive research, which contribute to telling the story of Agnes, Frederick and Natan, the men who were killed. This dual method of story telling was very effective; the juxtaposition of official language to the flowing, beautiful prose gave differing perspectives. I enjoyed being shown alternative viewpoints on this woman.

At the end of the novel, there was an article by Hannah Kent, and some FAQs, which really added to it for me. It was evident how thorough she had been just by reading it, and it was fascinating to learn more about her writing process (she would sit down and write 1,000 words every day, come what may!) and how much of the novel was fantasy and what was historical fact.

Overall, a brilliant, beautifully haunting book. I'd be fascinated to see what Hannah Kent writes next!

Thank you to Emma at Mr B's - one of the best books I've read this year!


What does anyone else think? Tempted to read it? Already read it? Excited for her next novel? Leave a comment and let me know!
Posted by E at 15:06