So, little M and I both found ourselves at 2 Coombe Cottages on Thursday - an impromptu and rare occurrence! A had mentioned something about sorting out her shells from the Scillies, so we did that in the conservatory as we caught up and chatted. They all looked very pretty when we'd finished... Of course, we were rather stupid, forgetting that we are sharing our house with two small kitten people, so the exercise had all been rather futile... 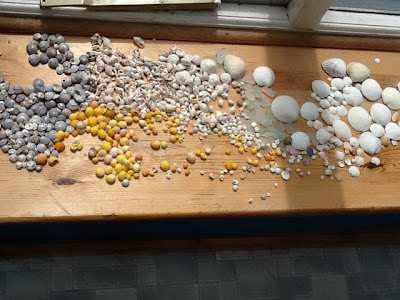 All our hard work wasted! At least the kittens looked happy. 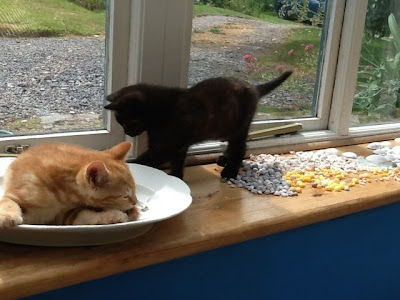 Little M had to go home on Thursday evening, so it as a very short visit, but nice to see her all the same.
On Friday, J and I decided to do something with the shells and that is what I am going to share with you all now. We didn't actually use these shells, but delved into A's stash of shells from years past (which is pretty extensive) to make a birthday present for S at J's work. Shell craft is usually A's forte, so J and I felt a little nervous at the prospect of potentially wasting her shells but we forged ahead anyway. This is what I'm going to share with you now.

This general technique can be used for lots of things - we've mostly used it for mirrors or photo frames, and have two huge A-made mirrors the bathroom at 2CC - but this time we decided to do as a sort of plaque.

So, first, you gather together your supplies. You need the thing you will be decorating, enough shells to cover it, water, polyfilla (or similar), knives for spreading, cloths for wiping up smears and a mind ready for creating! 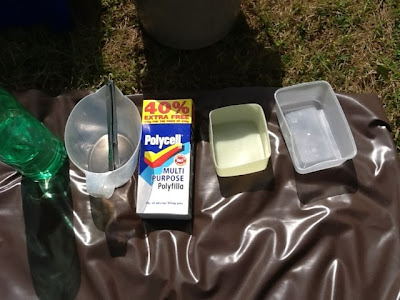 The wood we were using was quite rough, so J started by smoothing it out with a wire brush. 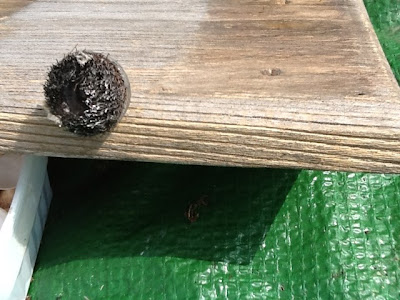 We were then ready to start!

It's a good idea to have a rough plan in your head of where you want the shells to be placed because, once you've started, you have to work quite quickly. The polyfilla we had sets in about an hour - and for the last 10 minutes or so is pretty stiff to work with, so the shells are less likely to stick. Also, working in a pair, its's a good idea to plan so that you don't have arguments in that crucial stage where everything must be done fast!

Here was our very rough plan - we just thought about where our biggest shells would be and agreed we would fill in the gaps however we felt like, keeping it generally symmetrical. 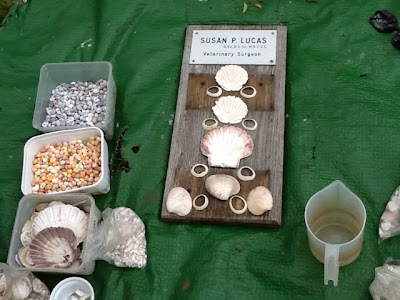 Now, mix up the polyfilla. The general ratio is 2 parts powder to 1 part water, but there's no need to measure it very accurately. Make sure you use something that doesn't mind getting a bit mucky, and be ready to clean it out before it sets too hard. The consistency you want is fairly thick, but not so thick as butter, and without lumps as much as possible. 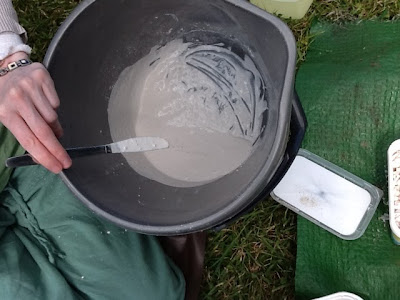 Now you spread it over your surface and start positioning your shells - couldn't be more simple! We started with the basic design we had mapped earlier... 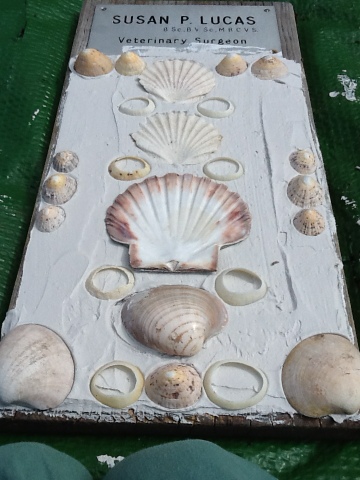 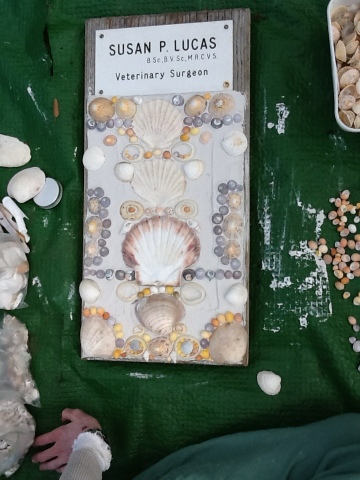 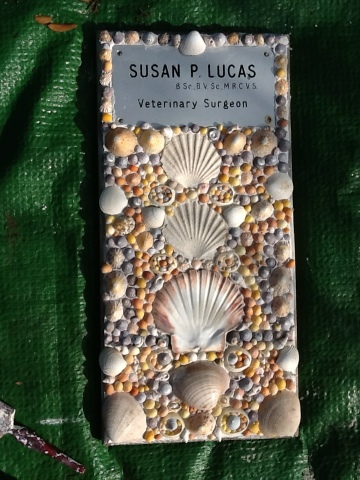 This is all a matter of preference - the important thing is to keep going before the polyfilla dries! It's good to have a balance of colours, shapes and sizes, and it looks best with the least amount of white showing between the shells as possible. This means searching for little shells, like tiny yellow periwinkles, little top shells and other elusive treasures like cowries and wentle traps. 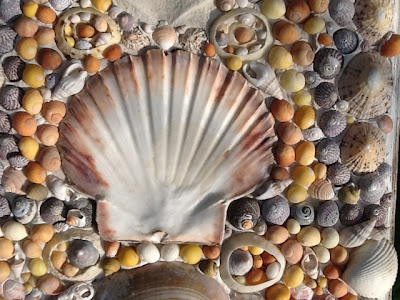 When the polyfilla gets stiff - stop! There's no point really ramming the shells in because they're more than likely to not stick properly and you can always add shells later (as we did) using glue (A told us super glue would've been better but we went for good old PVA). Now, leave it to dry properly. (At this point we went off for a walk.)

We went back and did the bit around the top of the plaque separately afterwards, and then left this to dry as well. 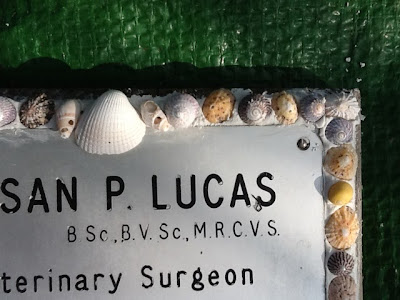 The last step is giving the whole thing a good varnish - we just used standard clear drying furniture/household varnish. Don't skip this step - varnishing the shells really brings outs their sheen, as though they are still wet from being washed up on the beach. 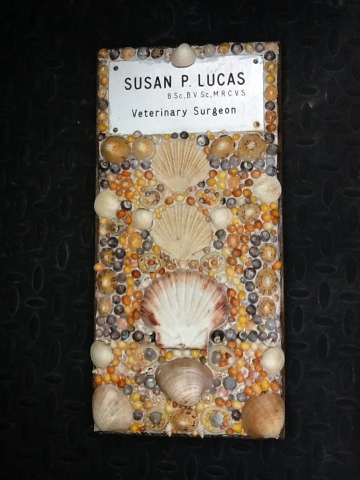 And there you have it - how to make a shell picture in a few easy steps! It's not as good as A's creations but for me and J it seemed good enough, and we just hope that S likes it. (I'm sure A would've done a better tutorial as well.)

A wonderful way of creating memories and using up shells and other bits and pieces that you collect on holiday - A also uses driftwood and sea washed glass but we didn't have any this time.

Romance is alive and well....

The Scillies brought out the romance in our lives.... T and H walked off into the sunset along the flats of the campsite beach and M and J were a wonderfully sartorially elegant couple. 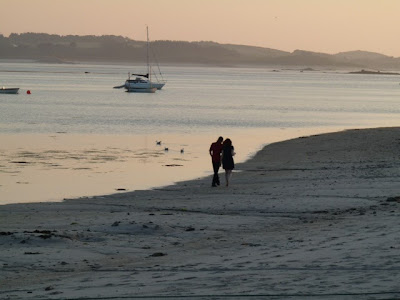 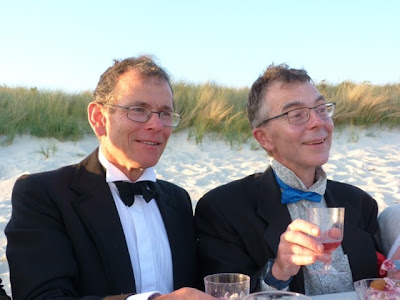 And now we are home again and the little cats are growing. Their names have stuck. Koshka ( Russian for cat) is the dark tortie with the wonderfully huge purr and heart warming chirrup, and Moo-sang (also meaning  a type of cat in Malay) is the little ginger boy who bats marbles and fluff with a hunting vengeance. They are learning to play gently with people, Kirry tolerates them most of the time and they scurry about the house happily when we are home. Very joyful! 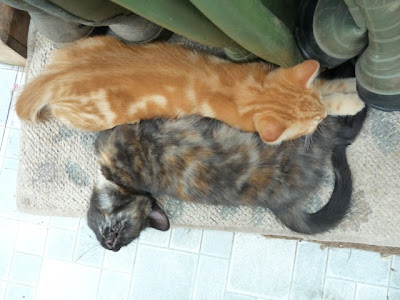 Last week we were in Scilly, our traditional family holiday. What constitutes a tradition? Well, we have been going to St Martin's for twenty years, so I think that does. The very first year we stayed in the Julian's cottages opposite the Post Office General Stores in Higher Town, then had a year break and since then have been most years for a fortnight to St Martin's Campsite in Middle Town. That first year E was in a back pack and wanting to get out and toddle whenever she could, and T was walking, but with a buggy close behind so that those short tired legs could get a break. How big the island seemed, exploring with those restrictions! I don't think we ever made it to either end, and the longest expedition was over to Great Bay on the north east side (about 500 m), somewhere we routinely go for a swim before breakfast now.

Who came this year? Sixteen of us, assorted cousins and friends, two of whom are the current residents of 2CC and two of whom were "Scilly Virgins" as someone dubbed them.
Here we all are on the beach last Wednesday evening: 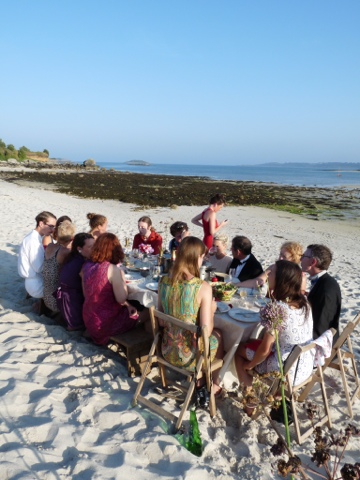 We don't habitually eat in this formal way on the beach, but on this occasion Little B had organised a celebratory meal,we had brought glad-rags with us, and then scavenged very successfully about the island. The table had once been a barn door, (it still had seven keyholes in), Sam's black suit came from the charity shop, as did the crystal pudding bowls and two of the champagne glasses. Most of the crockery came from the Reading Room, courtesy of Rod the postman and the charming table decorations and statuesque flower arrangements were from the dunes. 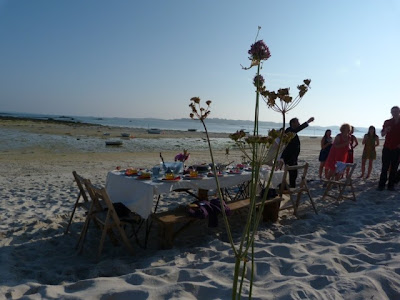 So what else did we do? We read (The Chaos Walking series, one of the Hunger Games and Far from the Tree for me) played Ticket to Ride ( and started to get a bit more sophisticated in its strategy), swam, sailed, kayaked (both round the island and to the Eastern Isles and Tresco), swam lots and TALKED. 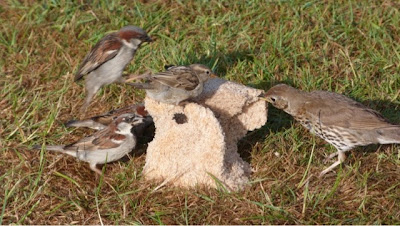 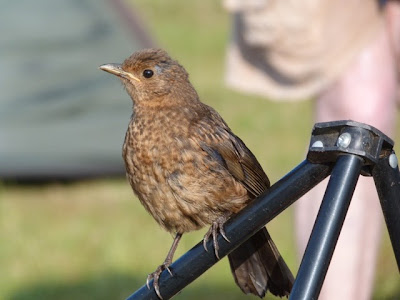 Sosmix, a 15 year old friend of Jamie's (or several generations down?) 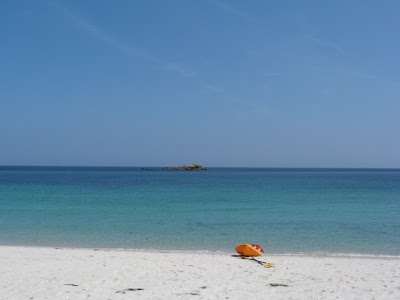 A  kayak resting at Great Bay on its way round St Martins. 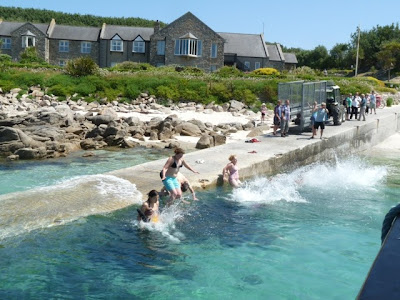 And this is the traditional parting ceremony: a St Martin's Wave?

We often say it is the best holiday place on earth, and this year it wasn't difficult to remember why we think so. Natural beauty, the sea, good food, wonderful company, shell collecting, physical activity of all sorts, and this year SUN, which does improve all the rest. May we return many times. 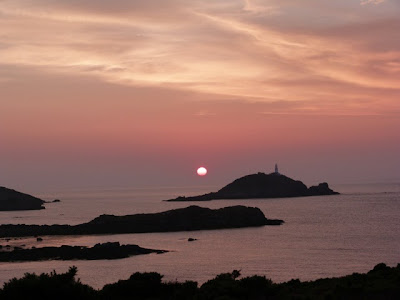 And here they are at home! Two new little cats for Coombe cottages. The only unhappy party at the moment is Kirry who is very suspicious of the chirrup noises, pattering of feet and smell of foreigners emanating from the family room. She will come around I'm sure and we are swapping scent, and associating it with food but we will just have to wait although I know she will ultimately cope OK. After all they can't be as bad as a wild Bengal. 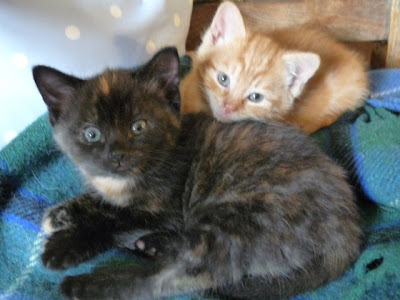 The kittens have experimental names at the moment but I'm waiting for the human family to gravitate homeward before making final decisions. They seem to have settled immediately - the dark tortieshell is a very positive about people already and sticks her tail up and rubs in greeting, the little ginger is less positive but is trying to groom me and loves play. I have time off work to get to know them and to help Kirry cope. :) 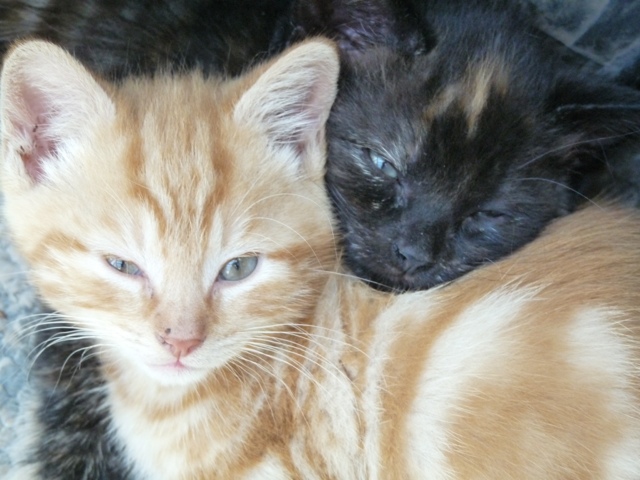