Bethlem royal hospital has an annual sun fayre where the on site gallery and  OT departments get together to put on a community event in the green and shrubby gardens. It's been a relatively low key event when I've been with E in previous years but we thought it would be a fun and positive venture to run a craft stall to raise money for charity. As everyone remarked it seemed most bizarre that E and I had never done this before despite our crafting ventures over the years.

E managed to recruit some other  contributions from  Tyson West 2 ward and with a beautifully old borrowed stripey gazebo, rickety wallpapering table covered in an old blue tablecloth and a set of camping chairs it looked like the real thing. A complex network of string allowed us to hang a pained blue sign and E's exquisite knitting. We managed to produce a range of crafty things over weekends in June - blue Haiku bowls ( paper bowls made from strips of newspaper with a special haiku written by T in Cambridge on the bottom in torn letters) , wash bags, patchwork cushions, appliqué cards, button and bead jewellery, friendship bracelets and broaches from Ay. I brought a huge bucketful of Somerset flowers to make into posies of wildness, and a tray of seedlings.
The day was showery so it was an exciting event with us sheltering from rain in our little tent, the stage at one end of te gardens producing a range of music and ramblings, other stalls with bric and brac and tombolas, and the art collections of Terrence and his colleagues in the gallery's tents.
We were pleased to raise just over £100 for charity - all but about £18 going to BEAT ( beat eating disorders) and the remainder to the Royal Marsden hospital in London . Thank you to Bry and Ay for helping us run the stall and face painting so continuously, and to all those who supported us. 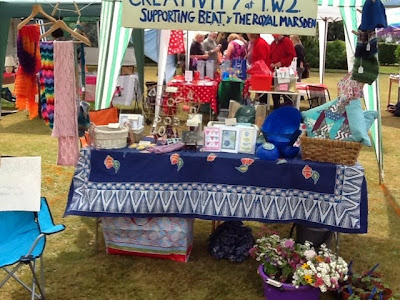 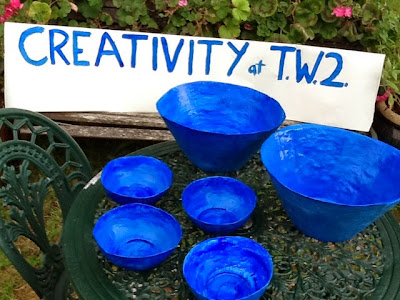 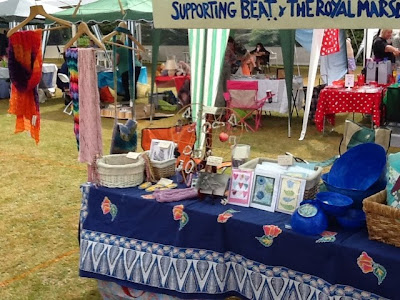 So, I've been being more active in the online world of book blogs and stuff this year, and I've been signed up for a read-a-long! For those that don't know, it's kind of like an online book group, where you read the same book (s) and then there's a discussion about them. It's a nice idea - talking books with people is fantastic in any way, shape or form.

I came across The Midnight Garden via GoodReads and following Wendy's (excellent) reviews. This year, the girls at The Midnight Garden are doing a Middle Grade read-a-long of all the classics that you may have read (or missed) as a child. For those, like I was, who are unfamiliar with the term Middle Grade, it's not quite Young Adult, but one step up from Children's. This means about 10-14 (I think!!?!).

I joined the bandwagon a bit late, so I missed the first book which was The Northern Lights - real shame as I love Phillip Pullman's His Dark Materials so much that it would have been lovely to read it with people. I've also missed one because I wasn't organised enough... So, at this halfway point I have managed three out of five books (it started in February). Not too bad... Hopefully I'll manage all of the next lot. The moderators at The Midnight Garden have been amazingly welcoming, and receptive to my comments (which haven't all been that positive at times!) and I really appreciate the sense of community. The fact that they take the time to answer comments makes me feel very included.

So, let's look at the books.

The first I read was 'The Luckiest Girl' by Beverly Clearly - I'd never heard of it, but it's apparently a classic wrong with this book, but it didn't really captivate me.
in America. There wasn't anything remarkably wrong with this, but I felt rather left out from the nostalgia trip it offered to all the American readers. It is a very light read about a girl called Shelley who spends one year (or two semesters, I think?) in orange county, staying with her cousins, at the age of sixteen. Basically, that is the premise and the plot of this book.

I think that the appealing thing about this sort of very dated book is the nostalgia element and, since the situation and the high school culture are not familar to me, I couldn't really take part in this. As such, it was... well, sort of boring. I hesitate to write this because (if it truly is a classic) then people might be offended, but I would expect it to work the other way round as well, ie. some British classics would not appeal to our neighbours over the pond. The writing isn't noteworthy, very little of substance happens, and I couldn't relate to her experiences.

Next was Anne of Green Gables, which (shockingly I know) I hadn't actually read before. Anne is such a silly young girl at the beginning, but it's very nice seeing her grow and mature. I wish I had read this as a child actually, as I think I'd appreciate it more then. I think it was one of my late grandmother's favourite books; she spent some of the war in Canada.

I liked Anne, despite her silliness, and although the plot is fairly banal, it was enjoyable to read.

Then, I missed out on A Wrinkle In Time, which was a shame - it looked good fun.

Most recently has been The Westing Game by Ellen Raskin: another book I'd never heard of (oh dear.) It's a mystery story, a murder mystery in fact: a genre that I have literally zero experience with, let alone of an American young adult/middle grade one. So, I was quite excited for something so completely novel.

Again, what lacked for me was the lack of nostalgia. I can imagine rereading this with pleasure, but since I have first been introduced to it as an adult, it doesn't feel the same.

Like Kim, one of the moderators at The Midnight Garden, I can embarrasedly confess that I didn’t “get” the ending until it was all spelled out! Am I just a very undiscerning reader? For me, I didn’t enjoy the plot line that much, but I did enjoy the characters. They were mostly a little larger than life, but it is an MG read, so that’s understandable.

Unlike many others, I wasn’t enamoured with Turtle, probably the main character. Maybe if I had read this as a child I would have been, but as an adult, her kicking of everyone’s shins and her obsession with making money on the stocks just didn’t make her appeal to me. On the other hand, I loved her older sister Angela and that story arc – agree totally that one of the most powerful moments in the book was when Angela changed her status from “none” to “person."

It’s Raskin’s little touches like that that made me continue with this book, despite being a bit lost by the plot (still embarrassed by how stupid I am!). I enjoyed the Epilogue, even though I was horrified that Angela ended up with Denton (a very boring man)… How can that be her ending??


So, there we have it. Halfway point of the year. I've already read the next one and will do a wrap up post in December I suppose! It's intriguing reading these classics with fresh eyes. What makes a classic? In my opinion it's something that lasts the test of time and doesn't feel dated; and for children's books, it's where the story can appeal to adult readers at the same time. Do not be deceived that children's books are easier to write!

What do you think makes a classic?