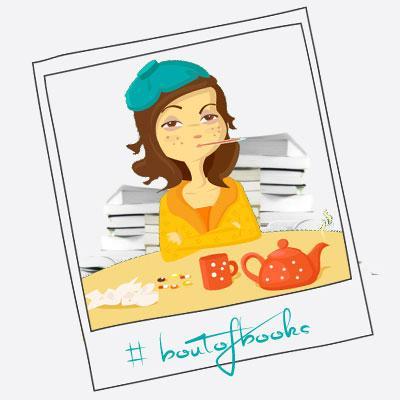 So, another day ran away from me and here I am at the end of day 5! I've totally failed at the readathon aspect of this - I've got to be honest. I tend to read 2-4 books a week on a normal week, and this week (a week where the aim is to read MORE!) I've only finished one book! And an audio book. Really not doing well. I'm managing to be quite sanguine about it, instead of beating myself up as usual - so that's a bonus! And the other bonus is that I've got quite a lot of writing done, so I'm not that disappointed. Feel I've sort of let the challenge down, but there we go.

Challenge, the fourth: ALL THE FAVOURITES

This is fairly open to interpretation, but I'm assuming it's famous book-related things at least! Personally, I hate making favourite lists, but here goes (using their suggestions):

Favourite audio book reader: Stephen Fry. Why? Because he's read the only audio books that I actually can't count the number of times I've listened to them. HARRY POTTER!

Favourite illustrator: Shaun Tan who did the most wonderful book 'The Red Tree' among others.
Exquisite illustration, really amazing and intricate. Other classic favourites include: Quentin Blake
(Roald Dahl), Arthur Rackham (Goblin Market, among others), and Eric Carle (The Very Hungry Caterpillar).


Favourite series: how is this a question?? I think I may have to refuse to answer. Series I love include: Harry Potter (obviously), Lord of the Rings, The Dark is Rising, Across the Nightingale Floor, Swallows and Amazons, The Moomintrolls... and that's just the classic ones! An impossible question, I'm afraid.

Favourite bookish blog: I really like The Broke and Bookish and The Midnight Garden, but there are so many good blogs out there that I don't want to miss out some awesome people. Those are just two - and The Broke and Bookish is no more! Very sad times. I also miss the Midnight Garden's Middle Grade readalong, which was lovely. But there are plenty more fab bloggers out there doing their stuff!(A lot better than I do...)

Favourite vlogger: I don't watch vlogs, so not really one for me.

Favourite librarian: my darling friend who is living far too far away in Canada. But she is an awesome librarian (and writer too!)

And there was day four!

Challenge, the fifth: Newspaper Headline (create a headline for a favourite story/book)

Ooh, this could be fun!

DUSTINESS IN NEXT TO GODLINESS
(His Dark Materials)

FOUR FOREIGN CHILDREN RECLAIM MONARCHY
(The Lion, The Witch and The Wardrobe)

That was a great challenge - thanks to Liz!

Anyone think of any good book headlines? It's good fun!