There was of course much eating done at CC last weekend, and very enjoyable it was, both in the making, the eating and the sociability involved in both.
First Little B made hot cross buns. Here she is decorating them: 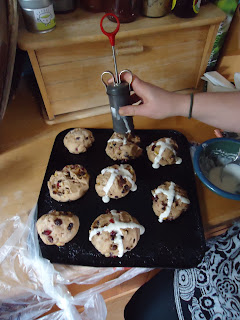 For the midday meal on Friday, A found a large impressive celeriac from the Riverford box, and looked in the Cranks book (one of her mother's I think) to find the recipe shown here:

This is an extravagant soup with incredible depth of flavour! Served with Gruyere toasts and rouille it's also quite substantial. Don't despair at the long list of ingredients - prep time is minimal! 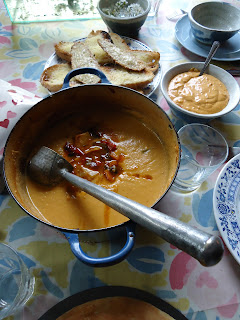 
HOW TO MAKE
Serves 6

Dry the orange peel by placing in a medium hot oven for 40 miniutes (this will fill your house with a wonderful aroma!)
Heat 3 tablespoons of olive oil in a large, heavy bottomed saucepan and fry the sliced, clean leeks. Then add the chopped carrot, sliced garlic, diced red pepper and black pepper - fry for around 10 minutes.
Add the fennel seeds, orange peel, saffron, tomato puree, soft brown sugar, celeriac and chopped basil and fry for about 5 minutes, until the celeriac is coated.
Add the hot stock and 1 tbsp olive oil. Stir well and cook on a brisk simmer for 30-35 minutes until the celeriac is completely soft. Around 8 minutes before the end, add the wine and the 2 tablespoons of chopped parsley.
Blend the soup until very smooth, first in a blender, then with a fine sieve. Then add the remaining soup so that there are some chunky pieces. Return the soup to the pan and add the remaining parsley and olive oil as well as the double cream.

A did all the initial bits, then got involved in crafting, so that J took over to make the rouille (which he also very much enjoyed pronouncing) and the later stages of putting together and presenting the soup. Also the gruyere toasts. I rather misunderstood this, so what we had were emmental on toast (see picture). And I suspect that the instruction to leave some of the ingredients not sieved did not intend for the bits to be as big as we see here. Never mind, it all tasted very good. 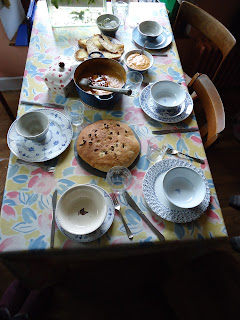