Preparing for the Michaelmas Fair

Our village has a traditional fair to celebrate Michaelmas at the beginning of September. It's a conglumeration of exhibitions and competitions to honour the season of fruitfulness and harvesting,  an opportunity to raise money for our community centre and the usual eclectic collection of minor children's entertainment, dancing dogs, and local brass bands. For some reason I have run the photography exhibition for the last 10 years which has over 500 entries which have to be pinned on boards on their classes, judged and rearranged with all the award cards displayed in the right place by 1.45 and the opening of the festivities. This means getting together a band of volunteers to meet me at 7am and accept photos, number them carefully with the exhibitors individual code, and allocate them to the appropriate board for the 25 classes. It's a long hard day as we have to then do the same at the other end of the fair!

I also have to set the classes and some of you may have noticed that I do tend to do everything in the colour blue so it's no surprise that last year one of the classes was indeed the colour 'blue'! 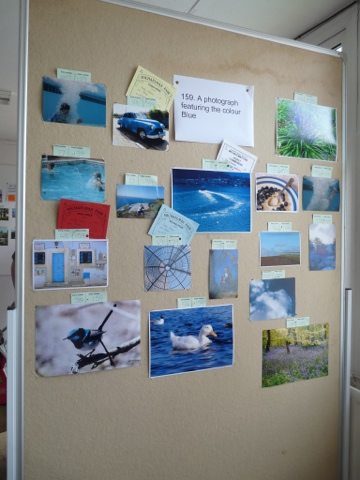 Despite the hard work and the marathon of the day its always a really happy occasion and I do get round the giant vegetables, jars of jam, elaborate cakes,  crocheted hats, wonderful calligraphy and exotic flower arrangements and see which of my friends and acquaintances have won this year. We have also exhibited ourselves over the 16ish years of living here, but have never won the elusive family trophy! We have had other major successes. In the past it has been giant pumpkins and  children's art work, and this moved on to cheese scones, shortbread and craftwork. 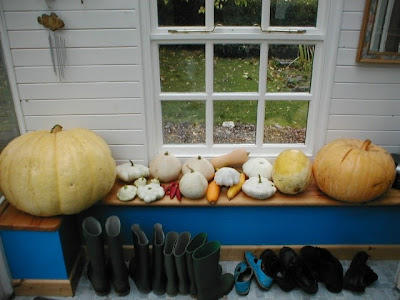 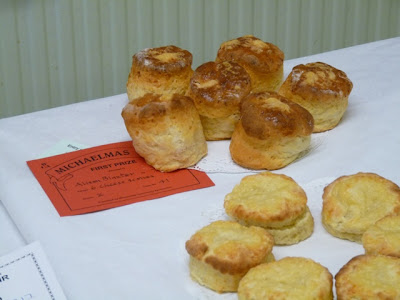 For the last 2 years E has won the Thomas Trophy for Creative Arts for her knitting, pottery, collage, card making and paper creations. Her knitting in particular has been outstanding. 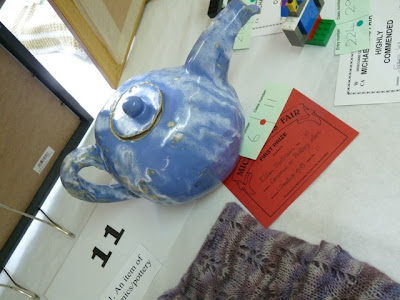 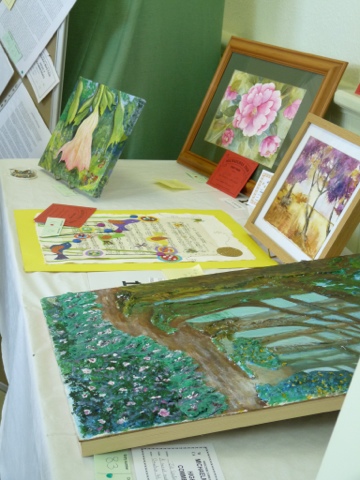 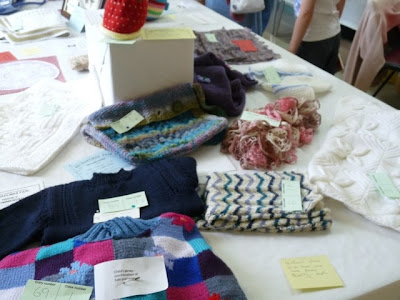 Sadly this year the trophy will move on as she has not been able to do any craft work since last Summer. I have polished the beautiful cup in the sunshine of the garden, and returned it to the butchers (the rather bizarre collecting place for the trophies to be handed in to in readiness for the next fair). Here it is 'growing'  in our garden. I have real hopes that it might return to her again in the future... 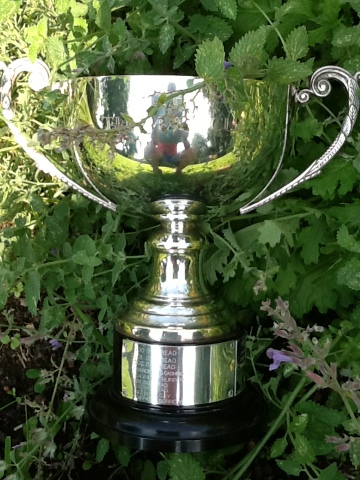 So the preparations this year are primarily my making posters and class headings, finding the right sticky tape that doesn't mark the back of the photos, and reviewing with the other volunteers our tried and tested system. We await the influx of eager exhibitors clutching tickets and pictures at 7am on the 14th! !