New kittens on the way...

Our very precious LC (short for 'little cat') died in January. She joined us as a tiny rejected Bengal kitten, one third of the size of her litter mates at 16 weeks of age and was thought to be unlikely to survive. Against the odds she gave us nearly nine noisy and sometimes stressful years before developing an untreatable cancer. She was a huge character - very affectionate, climbed the conservatory roof and sang, had battles with squirrels, dashed up and down the garden as if jet propelled, curled up under the duvet with me and tormented Kirry our sedate tortieshell cat in rather rough play. She always greeted me with such abandonment when i came home. She is irreplaceable.

However, the house is quiet and I feel the need for more cat company. There is nothing like cats to come home to... We think Kirry will cope best and feel less challenged by kittens, especially if there are two of them to entertain each other.

So we will be joined in a couple of months by these two little ones. Ginny, their mum, has been rescued by Sam at my work and is being fostered near us. Ginny is lovely - calm and very affectionate, and the four kittens are all growing well. Their eyes are almost completely open and they are starting to 'creep' at 13 days old. J and I have chosen the little ginger male and the female with the most mottled markings on her face. Little miracles in the making. 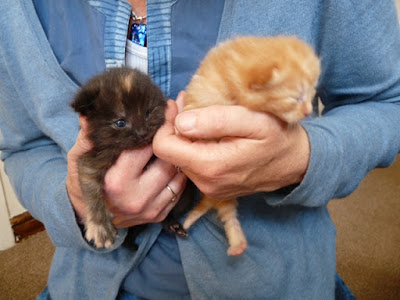 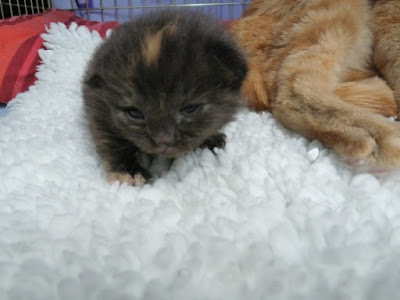