Whew, a bit late this year - wrote this up a while ago, but it's taken a while to post. They've already announced the Short List now, of course, and the winner's next week, but I thought I'd post our book club's thoughts on the whole list. Very brief, mostly in note form, just to give you an idea. I can't even understand some of my own notes: people spoke very quickly!


This year the Booker Long List has: four American American authors, 1 from South Africa, six from the UK, and 2 Canada. So our worry that it was going to be taken over by Americans doesn't seem to be coming real... 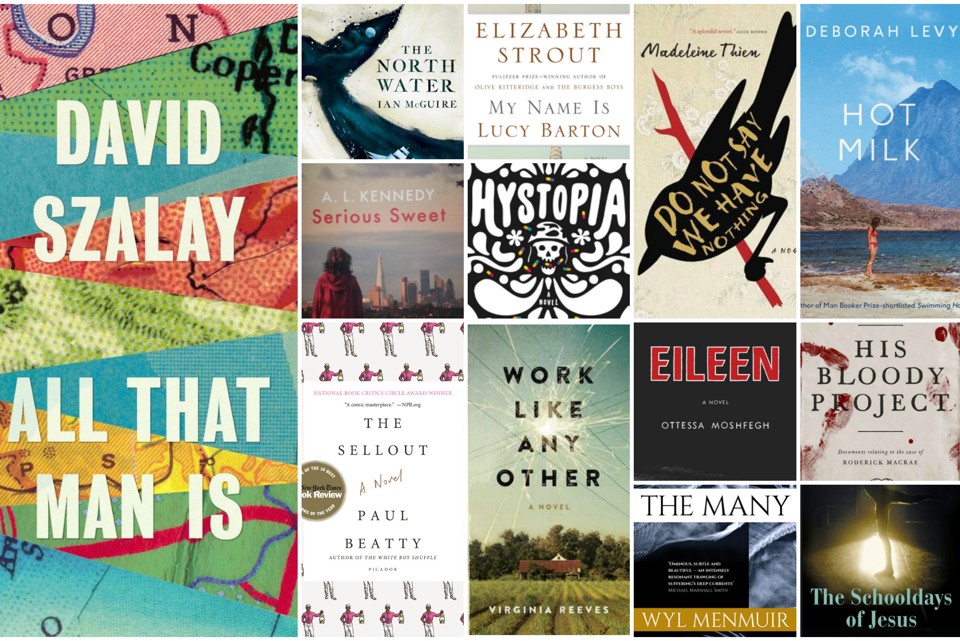 The Sell Out (JT) - hard work, eventually worth it. Witty if able to be understood. Too American to get most references. Got going 3/4 way through. Best read fast. At the end got the point that being black in America it's impossible to not be aware of it. Black humour. childhood studies. reinstating slavery and segregates school. Radical, wacky. Maybe short list.

Serious Sweet (CG) - looong. Established author, side up comic, writes guardian articles. One day, 2 protagonists, middle aged man and woman start arranging a date, stuff keeps getting in the way. Stream of consciousness. Not nice people. Spin doctor for government, good with words. Up to date, Boris Johnson. Cynical. Funniest bits political. Not so bothered about date. Did divorce matter, seems a sideline while married people writing nice letters to women. Female, recovering alcohlic. Bankrupt accountant. Pays for letters. Thinking about date. Political diatribes all over the place, but soft idea of romance. 500 pages too tedious. Not short list.

His Bloody Project (CN) - suited title. Unendingly bleak&depressing but well written. Tiny hamlet Scotland 19th century. Violent killing of 3 people, 17 year old admitted and awaiting trial. Lengthy self written account of killings by boy encouraged by legal advisor. No self pity. Modern readers would sympathise with his awful upbringing, was he responsible or not? Suspense between whose fault it is. Extremely we'll done, but not nice. Maybe short list.

The Many (ET) - Nice to see debut novelist. Vague premise from the blurb. Man moves to isolated place to set up new home for wife and baby-to-be. Intriguing. Unwelcoming community. Moved into house of someone who died, shakes up village. Fishermen go out every day, usually catching nothing. Chilling premonition of what over-fishing and poisoning can do to our oceans. 'Who will buy this half-dead catch the sea has thrown up. Not restaurants, he’s sure of that. Perhaps the pharmas, hoping to extract god knows what from them.' Some bumper captures, but the fish are diseased, almost dead before they reach the surface. Governmental waits to take them away - possibly for testing? Frustratingly, we never know any more. Sparse writing, which makes sense as Menmuir also worked as an editor. Like a horror film when you're sitting on the edge of your seat waiting for something to happen... but nothing ever quite does. Effective writing unsatisfying. Probably not short list.

Hystopia (DF) - violence. Novel in a novel, by Vietnam war still going in 70s where Kennedy set up peace corps to brainwash people of bad experiences. Sometimes doesn't work, social breakdown - sent to Michigan. Lots of drugs, tracking Rake who wanders and kills at random. Would it have better about Iraq instead of alternate universe? V American, skulls, acid trips. Breakdown of American society, very American written, not personally enjoyable. Not particularly well written or vivid. Not short list.

My Name is Lucy Barton - uninspiring cover. Short. Well respected author. Linear narrative, but most are memories so not as such. Strange: main cha is in hospital for long time for unknown reason, away from family. Mother comes and remembers childhood. Cold, not enough to eat. Hints of things, piece together her life. Relationship with family took away from mother. Met published author and husband sent her on workshop, had some interaction. Piece together what defines you as a person. Nothing v dramatic, like spool of blur thread. Sparse writing, not as good. Individual's place in the family, quite an American thing. Delicate, strangely crafted. Hints, illusions, glimpses. Enjoyed. Good for short list.

Work like any other  (JC) - readable. Historical Alabama 1920s, man works for power company, wife inherits the farm and he hates it,implications for marriage. Wife cold. Son Gerard, close relationship - violent response from dad, competing attention. Sets farm free up as charade for electricity, but is found out and manages to electrocute himself - is it his fault? Black man and cha get arrested for death - he 20 years to prison, black guy to nine. Nice description, detailed of countryside, prison and electricity. Reputation for being educated, spotted by a guard so covers up for guard who can't read. Confusion? Like Shawshank redemption, he gets out, sort of failure, writes to wife, never responds. Hurt with dogs, hallucinating - did wife come? Comes out and finds that black guy runs the farm, swapped situations, he's in the shack. No happy ending. Not outstanding, but readable, is it realistic? Black family accepted? Flits different perspectives, times but easy to follow. Not short list.

All That Man Is (CF) - established author, awards. Anomaly as set of short stories, dispirit characters, nine men. 17-73 year olds, what being a man is. Linear. Is this a novel? Opposite of chic lit - bloke lit! A lot of sex, making money, being successful. Why is this a Booker book? Economy of description, written well, but not interested in plot. Not into reading it. Through ages resonate more? Curious to keep going. Compared to William Boyd, Us. Odd. Readable, some compelling, but left pretty cold. Each story in different country, reflects cover, too light weight for short list.

Do Not Say We Have Nothing (CG) - third novel, established. Discovery of who father is when committed suicide at 19. Long. Basic history, linguistic characters, cultures corrupted continuity, generations, mon linear, China civil war. Could have been more of bits, only touched on things. Composers became examples to denounce. Thread running through of historic records, copying texts by hand, hidden, caught, persevering history. Narrator, daughter, finding out through fragments about father but doesn't read Chinese. Lyrical but sometimes dense language, bored and frustrated bogged down. Very long. Inconsistent. May make short list, draw diagrams yo make sense of. Story is gripping when you can find it!

OUR SHORT LIST - The Schooldays of Jesus, My Name is Lucy Bartlett, The North Water, The Sell Out, Do Not Say We Gave Nothing, His Bloody Project (Work like any other as a back up)

THE REAL SHORT LIST - Do Not Say We Have Nothing, His Bloody Project, Hot Milk, Eileen, All That Man Is, The Sell Out.

As usual, our opinions's differ from the judges! We'll come back with a few reviews of the short list before the big reveal next week! Well done if you read this far!
Posted by E at 12:31