26 books: A Book with a Female Herione

I really liked this book and I'm sure it will provoke tons of discussion as there is so much to remember and work out how it all fits together. I'm guessing that I will have missed nuances of connection that would become clearer with conversation with the book group.

It's a profoundly clever idea to write multiple versions of a life, muddle them all around and then

present them with the amazingly melodramatic yet evocative darkness falling at the end of each life . I think it illustrates how our lives are so random and what actually happens to us is just the culmination of a series of minor possibilities. It also makes life feel completely inconsequential in some ways: there was just a seconds difference between Ursula not being alive and her actually surviving so many times. Despite this very clever contrivance this device doesn't dominate the book. Often when authors get hold of a clever idea in terms of structure it's completely overwhelming and I didn't feel this was the case here. The human stories of these possibilities of people were very compelling and the description of life during the hardship of the wars seemed somehow very real. I loved the Hitler story as somehow being the best you could possibly do with your life in some way.I did wonder how conscious Ursula was of her lives. At the end this concept comes in in a more forceful way. I wondered whether any of the stories were then meant to be in any sense about real people or real things, and maybe we all create our own reality in our own terms.

I got this book from my Mr B's Reading Spa - thank you Mr B's and Emma!

In Burton's self-assured debut, The Miniaturist, we are swiftly introduced to Nella Oortman, and eighteen year old just married in Amsterdam. She is not greeted by her wealthy husband, Johannes Brandt, but instead finds the house with only his sister, the maid and a black man servant. When she finally meets Johannes, he is distant, and spends little time with her; his sister Marin is puritanical and disinterested with Nella, and there seem far too many secrets contained in this household. And that's without even mentioning her 3000 guilder wedding present: a cabinet-sized replica of their house... 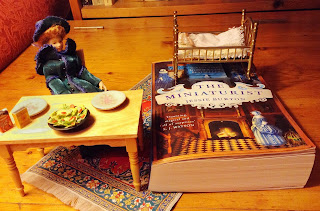 After a slightly rocky start – I didn't get into it as quickly as with many novels – this caught my attention. I liked Nella, I liked Cornelia, and I grew to like Marin, Otto (Toots), Hanna, Johannes, and most of the other characters in fact! I really wanted to know what was going to happen to them; the characters propelled the novel forward.
What could have been a rather banal story of a young bride in Amsterdam, struggling with her husband's 'defects' (I won't spoil it), was much more than this. I thought it was going to be a purely historical novel, but as the drama unfolded it became more than this. I loved the gradual nudging towards the supernatural. The cabinet, a seemingly patronising wedding gift, becomes central. The initial package from The Miniaturist seems fairly innocuous, but as each parcel arrives it seems more and more sinister. Or is it? Is the Miniaturist warning Nella, or is she the puppeteer pulling the strings?I loved this ambiguity. This was the stroke of real originality and intrigue in Burton's novel; what does it all mean? The gradual unfolding of Johanne's secrets, of Marin's (his sisters) secrets, the servants', The Miniaturist's... it's compelling almost in a horrific way. It isn't a horrible book; you don't go away with negative feelings, but it must be said that a lot of horrible acts are committed. It is haunting, as opposed to horrible. The historical side is very interesting as well as the supernatural: I learnt much more about trade in the seventeenth century, as well as a glimpse of prejudice and superstition on a personal level. I enjoy historical novels that do not ram facts down your throat; this is 'show don't tell' at its best.

There are flaws, of course. Of the three main mysteries, the first two could have been predicted. And the third is left untold... it's frustrating. It also suffers a little from being too gentle, and a lot of the potential emotional complexity isn't unravelled enough. We need to see the feelings, feel them with the characters. There were many points were I feel Burton had missed opportunities to further develop her writing, and the story.There are some lovely lines in the novel, including the notes from the mysterious Miniaturist, but I will leave you with what is, in my opinion, the most beautiful – and revealing – line:
'I love you. I love you. From back to front, I love you.' 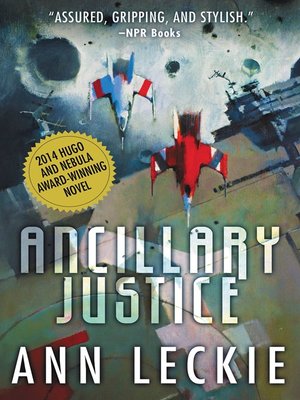 I haven't read a "spaceships and star troopers" type SciFi for a long while, and so was a bit doubtful when the wonderful Emma from Mr B's bookshop in Bath recommended this one.

It is brilliant! Complex, with a slow revealing not just of the plot, but also of the world in which it is set. There are too many names, most of them unpronounceable, and that does slow my reading down. That's no different to reading Tolstoy or any other Russian and my policy for years has been to skim on past, refusing to worry who it is we are talking about now, as if this is a good author, I will find out quite soon enough. That works very will for Ann Leckie.

The two main devices, that of having all the characters female, and quite a few of them, including the principal, as not-human, is brilliant. One is left guessing what it means to be reading about the inner thoughts and motivations of women who are in very unusual roles for women in literature (a lot of it is quite violent and very active), and then to have the added layer that they may not really be human/single entities/biological at all. But then they are (human, that is), or perhaps more than human, in ways that matter.

Go, Ann Leckie! I hope the rest of your series follows this up as well.
Posted by E at 23:12