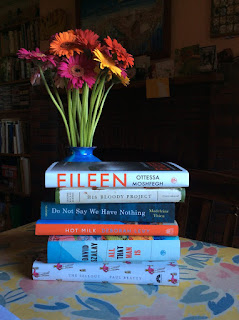 So, today's the day! Tonight at 9:30 (I think?) on BBC 4 there is the Man Booker Prize Giving and we will found out which book won. Tense! Will we get our preferred winner? We will see.

First, let's see who all the judges are this year:

So, an author, a critic and lecturer, another author and previous Man Booker nominee, poet and an actor. Good well rounded bunch; but I wonder what they're looking for - it always seems to be something different to us!

Onto the books, in no particular order:

A: Wild stuff! It took me a couple of graunchy starts to get into this but it is clever, witty and very American. The protagonist is black and has a bizarre upbringing and early experience which brings him to the conclusion that returning to slavery would be good for the black race in America, and this is then challenged in the Supreme Court. Great idea with some funny descriptions of early psychological experiments but not a book that gave me much pleasure to actually read because of the density of the writing. I can see how as a book in English it is really unusual so for that reason can see why its nominated. I'd be interested in talking about the humour...

J: probably witty, certainly informative on what it may feel like to be an African American, but too full of references I couldn't understand to be enjoyable, so ultimately boring. See full review here.

E: definitely witty, although quite difficult to read! The premise is completely insane and I'm not sure how the characters measure up in terms of reality. Another reason it was hard to read was the sheer amount of slang, specifically American ghetto slang. I gave up looking things after a while, but here are a few examples: druthers, bottle of bumpy-face, skrilla, pendajo, tchotchke, bromide... In the end it was better just to keep reading and sort of work out from the context of the word. The central protagonist is black and decides to bring back racism to his small (not) town. Dark, witty humour. I can see why it made the shortlist as there is such a lot to potential talk about the writing. Not really my sort of book, but still a contender and a good one.

A: The setting and the language of north of Scotland was wonderfully evocative of the sounds and sense of the tradition of my childhood and holidays but the story was brutal and ultimately very very sad.  The other interesting thing was that it was surprisingly un suspenseful and didn't really draw me in with the discussion about the jury verdict. However a clever device to have a set of found documents about a distant ancestor to tell the story. I'd be interested in whether other people found it the compelling read I thought it was meant to be or did I miss the point?

E: Not my kind of read normally, but it's great to branch out. What really didn't draw me to it was the fact that it was a memoir written by the accused, but then there was so much legalese and other things at the beginning, which mildly bored me. The account itself was more interesting. The fact that Macrae committed the murders in indisputable, but was he in sound mind? This seems like a much more modern concern. He's brought up in terrible circumstances but does that excuse him? ('He then brought my sister's head down towards the table and struck it repeatedly against the surface.') It interested me to a point, but it wasn't compelling despite the competent writing.

J: I haven't finished this one, but so far I find the main character unconvincing, and the whole situation too painful. Straightforward competent writing, not particularly interesting.

A: A pretty good book although very bleak. It's the story of a young woman living with an alcoholic and bullying father in a state of complete torpidity and boredom. In to this comes Rebecca, who becomes a beacon of some kind of change to Eileen and she follows her on a macabre and ultimately untruthful and disordered set of actions which bring  the story to a conclusion. The striking thing about it was the clever way the past and future of the main character were revealed just through the telling of their story set in the present of a week. No fancy flash backs or parallel stories. It has a huge sense of foreboding and disaster and tension but until the final thrilling event happened I hadn't any idea of what it was actually going to be. Very clever writing although some of the descriptive writing was clunky at times. Is it good enough to win - not sure what everyone would think?

E:  Well, this doesn't tick the normal Man booker boxes! - it's easy to read, it's not in some other language, you don't need to have a dictionary to read it, it's not 800 pages long ... It is pretty dark, but not what I would considerate be 'literary.' and it's a very quick read! It's nice to have some shorter books amidst the huge tomes. Eileen, set in the 1960s, is the central protagonist (Eileen Dunlop) is in a dire life position; but she is writing from far on in the future, seemingly as an elderly woman. We know she survives the novel: 'This is the story of how I disappeared.' The story unfolds, pretty grimly. My problem with this book, I suppose, is what makes it stand out? It's one of the fast-expanding genre of women thrillers. It's a good, quick, enjoyable and easy read, but I don't see what makes it stand out. I think what made it was the writing: Moshfegh writes very well indeed but I don't see it as a winner. See full review here.

A: Also interesting. It's the story of nine different men, away from home and its security and satisfaction with self and life, at different ages of their life. Although it's a different man and situation in each story I didn't feel cheated that the story didn't go on with them. However I'm overwhelmed by its sad and dismal portrayal of man or human-hood, despite being well written and clever in its language and structure. Not sure it's really polished or crafted enough to win. So does everyone feel the same or am I just overly swayed by the dismalness.?

E: I was really interested to read this from a female perspective because this is definitely all man is, not as in humankind. It doesn't paint a pretty picture; if this is what man is, then the key components are pettiness, huge egos, and need for sex. 't is comprised as nine short stories, each with entirely different protagonists, which immediately rang bells with me as being 'not a novel.' But who am I to judge that? The characters get gradually older, starting at the tender age of 17 (makes me feel very old!) right up to the ninth man who is in his sixties. They're from all over Europe: France, Budapest, briefly Oxford, Germany, Poland Geneva... I definitely enjoyed reading about the differing cultures. But, what does make it a novel? I suppose it's the connections between their stories. They're all men, and not particularly attractive characters: the first seven are absolutely obsessed with sex and have numerous affairs. As I said before, a pleasant picture is not created. Perhaps Szaly is commenting on the fact that nothing ever really gets better?

J: Well written, clever in the way the chapters linked but not quite clever enough to fully carry it off. Trivial. 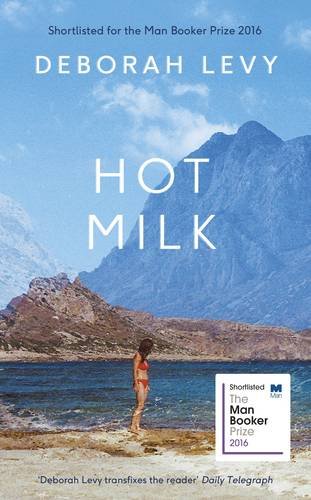 E: As A said, this is mesmeric. The heat and the alcohol make the book feel like a sort of haze. Sofia and her 'disabled' mother go to Spain to seek out another quack cure for this mysterious ailment. No one sees through the complete fraud of this except the medic's daughter, Elena Ferrante, and, to some extent, Sofia herself: 'How was my Mother to drive with no feeling in her legs?' I really enjoyed this odd novel actually: skilfully written, chaos of the plot with the exploration of Elena's sex life and friendship with a girl she meets, and the clearly hypochondriac Mother. A potential winner? Not sure. Don't know which parts are real and which aren't.

J: Good fun, dreamy in a way that worked, very atmospheric, no pace, no direction, and very well written in an unconventional way that I enjoyed.

A: Interesting. Mesmeric and definitely hot with a feeling of waves of heat in the setting, the chaos of the plot and the exhausting and incomprehensible heat of the emotions. It is the story of a daughter accompanying her mysteriously ill mother to a Greek island clinic and doctor... Not a waste of trees for me, as (AJ) declared, but a clever and sketchily spare emotional drama played out in maddening heat. Not a winner for me either but I can see that it might grab others. I wonder whether it seems unreal to other people? I'm  not sure it's very believable but does that matter?

E: There are a number of stories going on here: Ai-Ming in present day Canada, getting used to her cousin Li-Ming who has come directly from the Tianneman Square protests. What different lives they have lived. It is a story of fathers and daughters very much I would say. Ai-Ming has to learn to forgive her father, and Li-Ming has to learn to understand hers. What Thien has done is weave this complicated and very political plot with seminal Chinese moments, and yet brought it down to a personal level.It has inspired me to learn a lot more about China during the cultural revolution and beyond; it leaves me just gagging for more.Similarly, the amount of music there is in this book: a lot of Bach, some Shostakovich, some Profekiev. The writing was superb; horrific when needed, but not over the top. Thien's dialogue is particularly well crafted. I could've kept reading and reading. As a non-linear story, it was confusing at times, but it's worth working through it. I feel privileged to have read it. Superb. My Booker for 2016. See full review here.

A: And the best was last and I won't finish it before the Booker announcement but for me this gets the prize. I was absolute memorised by this book from its very start. The confidence and wonderful imagery of the writing just held me securely as I set out on the journey and I'm enjoying the meandering story telling. The flash back type structure seems to work well although I'm  writing down the names of the people and all their different incarnations and relationships to keep track. I love the multiple descriptive Chinese names of the characters, the evocation of music and the clever descriptions that juxtapose images in the way poetry does to help you grasp a new way of seeing things. I'm not sure where the story leads although it's already hinted at the future and I feel very held in the prospect of the journey.  Did everyone else find it lived up to its promise? It's a  complex of tales so I wonder if that distracts?

So there we have it: we have a winner - but will the judges agree? We'll find out tonight on BBC4 at 9:30 tonight, hope to see you there!