26 Books: A Book with a Blue Cover

This would have been number 18 for Bringing Up Burns 2015.


What an excellent book! All the right elements for me:
-compelling story
-characters I wanted to know about
-very good use of language, which only occasionally tipped over into self-indulgence, and when, towards the end, in my opinion it did with a paragraph that was in fact a rhyming list-poem for no reason, I was feeling indulgent. In fact as I write this, I am wondering if David Mitchell's knowledge of Japanese culture gives him a context that makes a rhyming list appropriate.
-information. I like finding out more about the world, and especially the historical world, and now I know more about the Japanese-Dutch relationship during the Shogun period of isolation. I have checked it out on the Netherlands embassy website, and it confirms the happening in the novel in some detail.
So: congratulations David Mitchell, may many more read this wonderful novel! I might even return to Cloud Atlas, which I gave up on some time ago, for reasons I don't recall.

What We Left Behind by Robin Talley 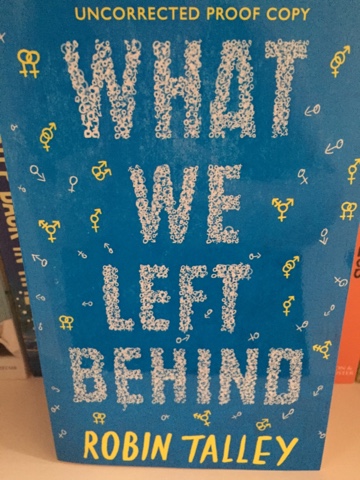 I don't usually go for romance novels, as they all seem a bit too... girly for me? Well, that's certainly bad terminology when reviewing this book.
What We Left Behind is the story of Gretchen and Toni/y, girlfriends, moving into college and discovering their identities to do with sexuality and gender. That's it in a nut-shell. It was really refreshing to see a young adult novel about transgender or gender queer people, rather than just gay people. Not that I'm opposed to LGB books - not at all! Just that this was something a bit more original.
It really made me think a lot more about the nuances of things - I've never thought about the use of pronouns particularly, or the difference between gender queer, gender nonconforming, non binary etc. Toni/y is struggling with all of these things throughout the novel. I liked the way that each chapter alternated the perspective (Toni-Gretchen-Toni-Gretchen), but, unfortunately, Toni was a much more dominant character. Until the end, Gretchen is fairly passive and a sort of vessel for Toni's continued rumination on her problem of labelling. She came into her own a bit by the end, but it was still much more Toni's than Gretchen's story.
Talley captured, I think, the confusion of indecision and identity very well. As a window in to what some people's lives can be like, I think this is a valuable book. But, because of the nature of a lot of the circularity of her ruminations, the book felt like it was also perambulating and repeating itself a lot. Sometimes perfect portrayal of a feeling or experience doesn't actually make for the most scintillating reading. Maybe some more editing wouldn't have gone astray?
Basically, I liked the premise, the story, and sort-of liked the characters, but I felt the writing let it down. It was fantastic and fascinating, though, to have some small insight into this world.
I received an ARC from NetGalley in return for an honest review, but all thoughts and opinions are my own.

This is the story of Nella, set in 1600s Amsterdam and her marriage to a merchant, woven with his odd household involving a black servant and his domineering sister Marie. It's very evocative of place with sounds/smells etc but an odd story with a mystic miniaturist model maker making a kind of 'real dolls' house.' Sad and tragic, but not ultimately depressing. An okay read.
Posted by E at 10:00