'The Son' by Philip Meyer (J): Gripping, horrifying and very informative. I think the multiple interwoven voices telling the story worked, and I was reasonably convinced by them , except perhaps for the only woman's voice. Then my other criticism would be that there were not enough women's voices (and it is clear that in the rape of Texas men and women were present all the way through) but if Meyer doesn't write women well, perhaps this is a good thing. 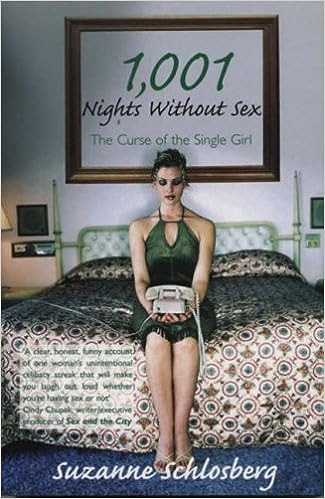 '1001 Nights Without Sex, The Curse of the Single Girl' by Suzanne Schlosberg (E):

Well, I picked this very very quickly as I am terrible at choosing. Quick explanation - had got no books when at the library due to being overwhelmed. The person I was with, basically, bored and told me we were going NOW. So I cry: what shall I get? She suggested I take something from the 'recently returned' shelf, as other people had obviously enjoyed them.
Hahahaha. This was as terrible as it sounds. Absolutely ridiculous. Uninteresting, solipsistic, and I really didn't even like Suzanne Schlosberg. Not really anything going for it. Never mind. You win some, you lose some. Just wish I hadn't wasted the time.
Posted by E at 10:51