26 Books: A Book with Pictures

This would have been number 22 from Bringing Up Burns 2015. 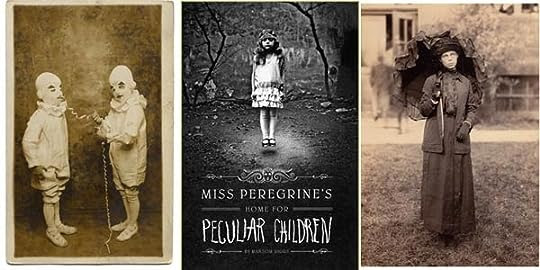 Miss Peregrine's Home for Peculiar Children was one of those books that was so hyped that I was desperate to read it. So, when at Mr B's, I immediately migrated towards it.

The cover screams 'horror' and 'nightmare' or even 'halloween.' Creepiness basically. I can't even remember if I read the blurb, but I didn't actually realise it was going to be fantasy. My favourite part was the beginning with Jacob and his grandfather and the idea that the monsters were a METAPHOR for the Holocaust. I was kind of hoping for some sort of novel where Jacob learns his grandfather's history, and there's some dark and horrible secret that was never told, and he took to the grave. Except that Jacob finds it out, through photo albums and diaries, and then has the dilemma of whether to tell anyway.

Oops. I'm telling you a different story. That's what I thought this should be. Riggs' book is actually very different.

It turns out that Jacob's grandfather's stories of monsters were all true, which I found sad as I just loved the metaphor he'd created. (which wasn't even a metaphor...) So, Jacob and his parents move to a small island where his grandfather had lived in an orphanage there. But Jacob can't find out anything this elusive building. This is, of course - for everyone who went into this without their eyes closed - a Home for Peculiar Children. They have various strange and, sometimes, life limiting powers and Miss Peregrine is there to look after them. In their strange dimension, they don't age, but they are protected by spells as there are people in the world looking to kill them.

I sort of enjoyed it, but something just niggled: it there was something wrong with it. Maybe it's just because it was so different to my expectations. I enjoyed the children's mad talents, and it was intriguingly peculiar. Riggs' writing style was actually beautiful; I was impressed this was his debut.

Plotwise... I just didn't become engaged. Again, this could be to do with expectations, but I don't think that was all. It was all leading to make a series, and I dislike books that are written like that. A book can also be a fully formed thing in itself, and should be written as such.

So, coming to the 'book with pictures' part, the photos were incredible. They really upped my enjoyment. And I liked the sort of ambiguity: they could be real, as in the children were really magical, but looked at with a skeptic's eye, there are ways they could have been manipulated. I really
enjoyed the extra photo section at the end. Actually, I loved the photos so much, that they've given this book an extra star, from two to three. Apparently Riggs found inspiration from strange photos of children, and that was wonderful. A book emerged from some real photos, watermarked and damaged as they were.

It was an enjoyable and I'm a big kid, because the pictures added so much to eat. As Alice said: “... what is the use of a book... without pictures or conversation?”

Let me know if you've read it too!

(A also read 'The Promise' by Nicola Davis, which we both agreed was a brilliant book)