26 Books: A Book at the Bottom of Your TBR Pile

This would have been number 8 for Bringing Up Burns 2015 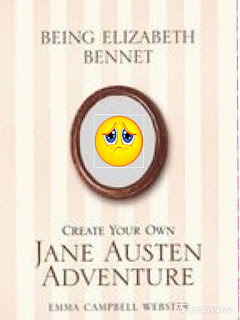 I guess this was at the bottom of my reading pile for a reason.
My God.
I've read plenty of 'option books;' there was a set I really liked when I was younger... was it 'Fabled Lands?' Something like that. So, I actually quite enjoy it as a format, if done well, even though a lot of people find the format itself an issue.
This wasn't the format. It was just ridiculous. I now that it was meant to be ridiculous, but this just transcends ridiculousness. You also had to keep track of all these accomplishments you had (like knowing things about ribbons etc) and your connections and blah blah. Now, this still could have been promising, but...
I failed on my first go by the third choice by becoming horribly scarred so no one would ever marry me. The second one went on a teeny bit longer, and I was married off and happy within about five minutes. The third time went on longer, but it was just tedious. And then I died.
I decided I'd given the book enough time by that point. Terrible. I love Austen, and I like those kind of books, so if I don't like it: please trust me. Don't buy it. (I was, unfortunately, given it, which is the only reason it was on my TBR list at all.)
Can you give something zero stars?

"Who is Ozymandius' by John Fuller (J): Giving up really rather than finished. I found it worthwhile and interesting for the first third, and then it felt as though the ideas had run out and it was just a list of other things about other poems strung together to make it long enough to publish:(

I don't think this was bottom of A's reading pile exactly, but it wasn't something she was desperate to read! It was set for book club, and not the kind of book she's necessarily enjoy. Let's see what she thought!

'A gripping yarn! It's a rewriting of the WW2 and taking an alternative path as if Churchill hadn't become Prime Minister and the UK acquiesced to Hitler at the (non) start of WW2. Britain became a Dominion of Nazi Germany, and this is the story of a spy/resistance fighter in the context of an occupied England. David is a civil servant who becomes embroiled with an old school friend 'Frank' who has has a secret from is USA brother, which might save the resistant/the US in terms of fighting the Germans.
Descriptions of 1950's England and poverty and despair. David's drama as a spy was well done.

Poor - the actual premise of the novel, being that Frank had something the Nazi's really felt was worth knowing. Characterisation = poorly/crudely/comedically drawn Scots, and the health worker of France.
Posted by E at 10:29