This would have been number 10 in Bringing Up Burns 2015.

This was quite a hard one actually! I liked A's take on it best.


'The Road to Oxiana' by Robert Bryson
Just to make this totally clear, this is complete cheating because Joe read it in May 2016. He wanted it up here, and I told him it was last year's books, but he wouldn't take no for an answer. So, here it is, in wonderful cheating glory :)

This is a travel book, as the title suggests, and it is not by a relation of the 19th century poet of the same name, as both I and the person who gave it to me imagined. Robert Byron was a wealthy (Eton and Oxford) early 20th century man with no need to do anything to make his living, and having an interest in architecture inspired by his mother. He took it upon himself to find out about Islamic architecture, and in particular that of the very early flowering of highly decorative scripts (he usually refers to these as Sufic, so presumably inspired by people of the Sufi part of Islam?) made into the surfaces of mosques and tombs and memorial towers in the 11th and 12th centuries CE in Persia and Afghanistan. Getting into and getting about that part of the world then seems to have been as difficult in the 1930s as it it has been in much of recent times. There were the same political and administrative blocks to get past, the considerable risk of violence in Afghanistan, and also a lack of any surfaced roads between Damascus and Kabul. Much of the travelling was done in a Chevrolet truck, some on horseback and the rest in a series of cars which were regularly stuck in mud or sunk in rivers, which seem to frequently flash flood. Byron himself is very sanguine through all this, keeps his reading up (Proust and the like), and writes in great detail and with huge appreciation about each of the many mediaeval monuments he finds. I kept looking them up on google images, and his descriptions are accurate. Some, sadly, particularly in Afghanistan, have deteriorated in the last 80 years.

He also seems to have been a pretty decent linguist, at least in the language of Persia/Iran (Farsi, I guess) and reports many conversations verbatim, many of which are very entertaining. He was of course a man of his time, and freely uses race terminology in a way that is quite uncomfortable reading. My guess is that he was probably more liberal than many contemporaries though, as he doesn't go far out of his way to make negative comments based on race. He comes across very few women (how different would that be today, I wonder, and suspect not much different in Afghanistan at least) and occasionally comments on this. He is quite interested in current local politics, and dislikes the modernising intent of the then Shah of Iran/Persia, whom he refers to as Marjoribanks throughout, supposedly so that if his writings were found no one would realise he was being disrespectful.
I have a prejudice against travel books, and this was a pleasant surprise, engaging, informative and fun. I finished it wanting to travel in that part of the world, though I guess that Afghanistan would be frightening and probably dangerous.

'The Ocean at the End of the Lane' by Neil Gaiman (A):

Where would you want to live but somewhere magical?

I have always wanted to visit Iceland. Well, that's a slight exaggeration of course. Since I've know what they are, I've always wanted to see the Aurora Borealis. So, any country where you can see them. But then I got into 'The Princess Diaries' by Meg Cabot (I was thirteen at the time, in my defence!), Mia had this obsession with Iceland. She had all kinds of cool facts about it: for example, that when the opera had a specific Russian opera visiting them (can't remember what it was), that ninety eight of the population went. Ninety eight! Mia figured this was because there was nothing to do. (I have no sources for the percentage and it may be complete bollocks.)

Anyway, my longing to visit Iceland grew and grew until it had to be the place I would visit. Sadly, I've never been. But My brother and DJ Lush (his partner) went and had a great time (although I'm not sure they packed well enough for the cold!), so I've been vicariously. 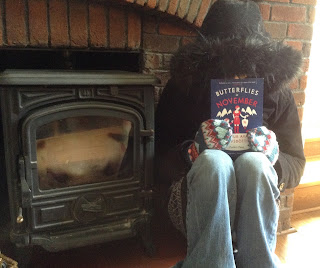 When I went to the wonderful Mr B's (again, I'm really) not being paid to advertise them, I had this list in mind, so I needed a book set in Iceland. I'd already read 'Burial Rites' (read it: amazing!), so I just asked them to find me something set in Iceland. A few minutes later and I had a choice! Brilliant service. This one looked quite fun, so I went for this.

First of all, this book is first person, narrated by someone whose name isn't revealed. It's an odd way to write but there's always an authorial reason for it, usually because the character feels unnoticed. I don't this protagonist necessarily unnoticed, she just feels lacking in identity. We never learn her name.

This is the story of a woman who, to be quite frank, has a crap day. She got dumped twice (her husband and her lover); she murdered a goose; and her best friend (Auður-Perhaps a hint of something autobiographical) has been taken to hospital. She, agreeably, says she will look after him over the weekend. She promises herself a six week break, travelling around Iceland. But then the weekend turns into three months - the time her friend will be in hospital. And the trouble with Tumi... well, he's a lovely boy, but he's deaf-mute, only speaks minimal sign language (which she doesn't speak), he has to come with her on the trip (his mother is very blasé about it), and also he's incidentally been promised a pet. So, they have to find a pet than can travel, shattering Tumi's dreams of a horse. And one of the key reasons her husband broke up with her is she cannot deal with the idea of children.

It's really not going well.

It's a real mix, this book. It's very funny in places. The people she mets upon the way are often laughable, to the point of being caricatures. In this zany book where 'nothing is as it should be any more' and butterflies are flying in November, there a lots of powerful moments. Yes, it great fun when she wins two lottery tickets and they splurge out on fun things; it's cool (literally!) when they go swimming in the icy waters of Icelandic lakes; the contrast between her life in Reykjavík and the countryside.

But there are serious issues here: what does it mean to be a mother? What really makes a marriage? (Her husband says that it does not include '[coming home] On Tuesday [and] you've cooked a four-course meal on a total whim, a Christmas dinner in October.') What importance is your job; how much does it affect your quality of life? (That's an interesting one - the author works partially as a translator, and that is the character's mine job.) And there are the flashbacks to her childhood, which are very touching.

Overall, though, it is an quirky fun book at heart. It's quite simply, and somewhat touching. It ends with 'Forty-Seven Cooking Recipes and One Knitting Recipe.' There's a word of caution in there -

'certain of these dishes may work better on the page than on a plate...' Prime example" 'Undrinkable Coffee.' Hmmm.

She goes to a medium at the beginning of the novel, who gives her these words of advice:

"...it's all threes here. Three men own your life over a distance of 3000 km, three dead animals, three minor accidents... animals will be maimed, but the men and women will survive. However, it is clear that three animals will die before you meet the man of your life... and it would be good to buy lottery tickets... two..."

And it all seems pretty apposite...

I'll stop going on; I seem to have much more to say than I thought!  Sorry for such a long review. And even despite the rain and the cold and the desolateness, I still definitely want to go Iceland. One day.

And, as always, thanks to Mr B's, and a shout out to Brian Fitzgerald, as translators are always underrated.