26 Books: A Book You Started but Never Finished

This would have been number 11 in Bringing Up Burns 2015

I must be one of the only people who hadn't read 'Wuthering Heights.' I expect you're shocked. I'm sort of shocked at myself! But I've tried it a few times, and just really not got into it. I think I've barely made it past the first chapter or so before – and believe me I've tried. It's been a matter of pride somehow – why can't I read 'Wuthering Heights?'

So, this obviously had to be my choice for 'A Book You Read But Never Finished' in the 26 books category. Had to be. This was it. I'd have to keep ploughing on and just do it. (And believe me, this is really unusual. I generally will not leave a book unfinished, even if I think it's dreadful. It wastes so much reading time.)

And I did it! *cue cheering*

(Oh God, I hate saying this about books that are classified as classics and EVERYONE loves.) I just didn't enjoy it as much as I had hoped. After all this time, and all the hype, I thought it had to be just fantastic. But… I did still struggle to get through it. Oddly enough, when I changed from a nice new paperback we had around to my mum's completely falling to the pieces god-knows-how-old-it-is one, I found it easier. Do you find books easier/harder to read based on type setting etc. I've never noticed it before.

Anyway, the book. I loved the wildness of the setting, the way the outside world seemed to be creeping inside the people and almost making their madness. I'd love to go up to Yorkshire and see the Bronte house and the museum and the moors. (One day, one day…) I guess my problem was that I didn't like the characters. I can tolerate characters that I don't like in general, but this really stemmed by enjoyment of it. Heathcliff was just so… nasty, that I found it hard to believe Cathy's infatuation. I understand why he was nasty; Bronte has built up his story enough. But the Cathy that we, the readers, know just (in my opinion).

It's a deeply sad book as Heathcliff becomes increasingly like the man that he hates; he becomes what he had been brought up with.

It's a dark novel, very dark. I hate admitting it, but it was hard to get through, mostly because of the language. (Shock! Horror! Blasphemy!) It feels like a debut novel, and I wish Emily had written more, because I believe she could have improved and written something I didn't have to force myself to read!

Really, disappointed. With me, and the book. I struggled so much with it, and it's such a popular book that I must have just missed something.

Sorry Bronte fans. (ie the rest of the world).

But I also won - I conquered 'Wuthering Heights!' One point to me! But I feel like I've failed it; my inadequacy as a reader meant I didn't enjoy it. So maybe we're even? 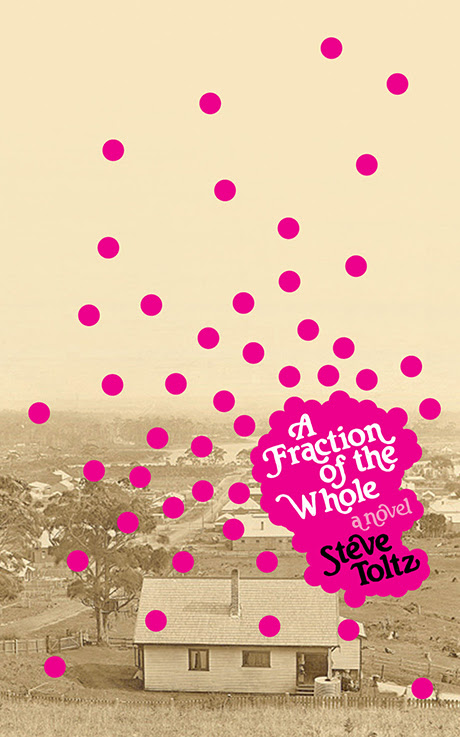 'A Fraction of the Whole' by Steve Toltz (J):

What a terrible annoying book (sorry Steve). I attempted to read it first a few years ago when it was one of the Booker shortlist, and gave up after two chapters as I disliked the characters and didn't understand what they were doing or when. I reread (about 80% of it) when it came up in our book club last year, and felt obliged to read more of it. Even then, I couldn't bear it after a while, and so having got 60% of the way through, skipped to the last couple of chapters to find out how things resolved.
I REALLY didn't like the characters, not any of them, and if Australia is anything like this (of course it isn't) then it must be a terrible place to live. My overriding sense was that the author must be extremely depressed to write like this.
Avoid!
Posted by E at 10:48